Characterization and Potential Use of Source-Separated Urine 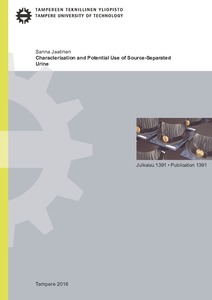 Human urine is an abundant source of the main nutrients (N, P, and K), while in the modern age it may contain traces of pharmaceutical and hormonal compounds. In many parts of the world, urine is collected into sewers, mixed with other wastewaters and treated at centralized wastewater treatment plants. Recently, the source separation of urine has been considered as a way to promote nutrient recovery from households as concentrated streams which could promote its use as fertilizer. The presence of pharmaceuticals and estrogens in urine has raised questions regarding its safe agricultural use, thus leading to a need to monitor the presence of pharmaceutically active compounds in urine. As a minimum, six-month storage before agricultural use is recommended for urine for hygienic reasons. The objective of this thesis was to develop and facilitate the use of source-separated urine by making the characterization of urine easier and faster, to gain more understanding regarding pharmaceutical and estrogenic behavior during urine storage, and to evaluate the suitability of human urine in microalgal cultivations as a nutrient source.

An analytical liquid chromatographic method, which had the advantage of simultaneous analysis of eight pharmaceuticals in a short six-minute analysis time, was developed as no such method previously existed (Paper I). The method was validated, proven repeatable, and the obtained pharmaceutical recoveries were acceptable (81.6–109.2%). The limit of detection for the pharmaceuticals in urine was 39–1 610 µg/L. In addition, a previously developed bioluminescent yeast cell biosensor Saccharomyces cerevisiae (BMAEREluc/ERα) was applied on urine samples, as prior to this thesis no information was available on the use of yeast biosensor in estrogenic activity assessment from source-separated human urine (Paper II). The biosensor produced repeatable results in the estrogenic activity testing of fresh and stored human urine with the limit of detection corresponding to 0.28–35 µg/L of estrogens. To enhance the signal, incubation with β-glucuronidase enzyme was used. The biosensor gave a cumulative signal for estrogenic activity (estrogens and estrogen-like compounds), thus enabling the assessment of overall estrogenic activity during urine storage.

The method presented in Paper I was subsequently used in monitoring spiked pharmaceutical concentrations in urine during six-month storage (Paper III). Each pharmaceutical (three antivirals and four antibiotic compounds) was tested in laboratory storage both individually and in therapeutic groups, as well as in therapeutic groups either with feces or urease inhibitor amendment. During storage, the overall concentration reductions of <1% to >99% were detected, and in assays with amendments, concentrations reductions remained <50%, except for rifampicin (>99%). Four of the pharmaceuticals had reduced concentrations after a sixmonth storage, suggesting biological or chemical degradation and/or precipitation of the compounds.

Human urine was tested as nutrient source for biomass production from microalga Chlorella vulgaris (Paper IV). Biomass yield in diluted urine was comparable with growth in artificial growth medium and urine could be utilized up to 1:25-dilutions without inhibition to algal growth. The highest biomass production (0.6 g/L) was achieved in 1:100-diluted urine. C. vulgaris used 32.5–78.7% of N and 35.1–99.0% of P available in urine. At the beginning of cultivation, the majority of the biomass consisted of algal cells, while towards the end the share of living algal cells decreased, indicating accumulation of bacteria and algal cell debris.

In conclusion, the results obtained in this thesis indicated that the pharmaceutical concentrations did not reduce enough in order to safely use urine. The yeast biosensor demonstrated that during storage, the estrogenic activity changes most likely due to bacterial enzyme activity, but some activity is still present after five months. The urine is a viable nutrient source for microalgal biomass production, thus having potential for sustainable use and recycling of nutrients.