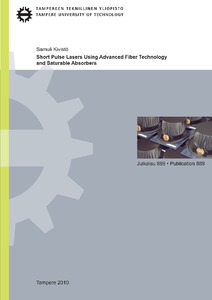 Ultrafast fiber lasers with superb pulse and beam quality are becoming important in various fields of applications including high-precision material processing, bio-medicine, fiber optical communications, and ranging. This thesis is concerned with the research and development of ultrafast fiber laser technology. Passively mode-locked and Q-switched fiber lasers operating at 1-2.2 μm IR-spectral range have been developed and studied.

Ultrashort wavelength-tunable pulses beyond 2 μm with durations below 200 fs were generated through a soliton self-frequency shift in a Tm-Ho fiber amplifier seeded by a Tm-Ho master oscillator mode-locked by a GaSb-based saturable absorber. Finally, a novel ultra-broadband saturable absorber based on carbon nanotubes layered on top of an Ag-mirror was demonstrated. The same sample of polymer-free carbon nanotube absorber was used to reliably mode-lock ytterbium-, erbium-, and thulium-holmiumdoped soliton fiber lasers producing sub-picosecond pulses at 1 μm, 1.56 μm, and 2 μm, respectively.