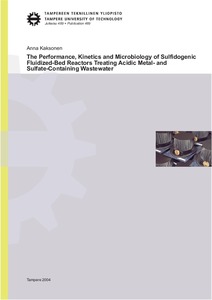 
Kaksonen, A.
Tampere University of Technology

In this work, a sulfidogenic fluidized-bed reactor (FBR) process was developed for treating acidic metal- and sulfate-containing wastewater, the process design parameters were determined and the bacterial diversity of the FBR was described. The process is based on sulfate reduction by sulfate-reducing bacteria (SRB), precipitation of metals as sulfides with the biogenic H2S, and neutralization of the water with biologically produced bicarbonate alkalinity. Lactate and ethanol were used as electron donors for sulfate reduction.


The FBR process performance was evaluated under various operational conditions with continuous flow experiments. In terms of sulfate reduction, sulfide production and effluent alkalinity, the start-up of the FBR with 10 % fluidization rate was superior to the FBRs with 20-30 % fluidization rates. However, the FBRs with 20-30 % recycling rates performed better at the highest loading rates. The substrate feed of the FBR could be changed from lactate to ethanol without significant change in the FBR performance.


The robustness of the bioprocess was studied by increasing stepwise the zinc, sulfate and substrate feed concentrations and decreasing the feed pH, as well as decreasing hydraulic retention time (HRT) until process failures occurred. Lactate- and ethanol-utilizing FBRs precipitated 350-360 mg Zn l-1 d-1 and 86 mg Fe l-1 d-1 from acidic wastewater containing 230-240 mg Zn l-1 and 57-58 mg Fe l-1 at a HRT of 16 h. Percentual metal precipitation was over 99.8 % resulting in effluent soluble Zn and Fe concentrations below 0.1 mg l-1. The alkalinity produced in the sulfidogenic lactate and ethanol oxidation increased the wastewater pH from 2.5 to 7.5-8.5.


Maximum metal precipitation rates were obtained with ethanol-fed FBR at a HRT of 6.5 h from acidic wastewater containing 176 mg Zn l-1 and 87 mg Fe l-1. The rates were over 600 mg Zn l-1 d-1 and 300 mg Fe l-1 d-1, percentual metal precipitation over 99.9 % and effluent metal concentrations below 0.08 mg l-1. The alkalinity produced in ethanol oxidation increased the initial pH of 3, resulting in effluent pH of 7.9-8.0. At the HRT of 6.5 h, ethanol oxidation was incomplete and acetate accumulated in the FBR. The operation of the FBR at HRTs below 6.5 h was limited by partial acetate oxidation, since alkalinity production by acetate oxidation is necessary for wastewater neutralization.


After a performance failure caused by intentional overloading, the FBR process was recovered in a few days by adjusting the FBR liquid pH to 7 and interrupting the feed pumping for one day. Biomass yield in the FBR processes was 0.049-0.054 g dry biomass / g of lactate oxidized or 0.053-0.074 g dry biomass / g of sulfate reduced. Zinc and iron precipitated predominantly as ZnS, FeS2 and FeS. The metal precipitates did not cause clogging of the reactors during the continuous operation of over 1200 days.


Bacterial communities of the FBRs were characterized using culture-independent molecular methods (clone library and denaturing gradient gel electrophoresis, DGGE), phenotypic methods (phospholipids fatty acid profiling, PLFA) as well as bacterial isolations. The bacteria were identified based on 16S rRNA gene sequences. The FBR communities were diverse given that they were enriched and long-term maintained with simple electron donors. The FBR communities, originally enriched from methanogenic granular sludge and mine sediments, contained SRB related to members of the genera Desulfovibrio, Desulfobulbus, Desulfotomaculum, Desulfobacca and Desulforhabdus, and also many species that do not reduce sulfate. The FBR communities contained many previously undescribed bacteria. The clone libraries showed a significant difference in the communities of the lactate- and ethanol-utilizing FBRs, and DGGE indicated some changes in the communities over time. The PLFA analyses showed some signatures consistent with sulfate-reducing communities, but not any substantial difference between the microbial communities of the reactors. Many of the strains isolated from the FBRs were only distantly related to previously described species and, thus, may represent novel species or genera. The combination of molecular and culturing methods allowed the detection of more species in the sulfate-reducing FBR communities than either approach alone.


This study demonstrated the feasibility of the sulfidogenic FBR for concomitant removal of acidity, metals and sulfate from wastewaters. Process design parameters for the FBR process were determined. The study also contributed to the understanding of the wide microbial diversity in the sulfate-reducing FBRs fed with simple electron donors only. Further, several bacterial strains possibly representing novel species or genera were isolated and characterized.