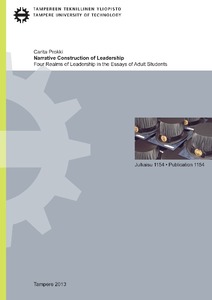 This research emphasises the social construction and relational nature of leadership. The study is qualitative and inductive by nature, using narrative methodology in order to make sense, communicate, and construct the leadership phenomenon. The focus of this research is in reconstructing leadership using written essays of adult higher education students.

By legitimating leadership as a relational process instead of describing it as an individual-based issue, this research and its idea of multiple realities invites the audience to dialogue and discussion.