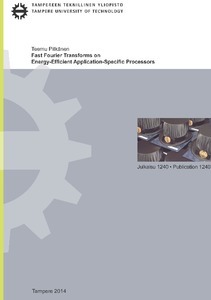 Many of the current applications used in battery powered devices are from digital signal processing, telecommunication, and multimedia domains. Traditionally application-specific fixed-function circuits have been used in these designs in form of application-specific integrated circuits (ASIC) to reach the required performance and energy-efficiency. The complexity of these applications has increased over the years, thus the design complexity has increased even faster, which implies increased design time. At the same time, there are more and more standards to be supported, thus using optimised fixed-function implementations for all the functions in all the standards is impractical. The non-recurring engineering costs for integrated circuits have also increased significantly, so manufacturers can only afford fewer chip iterations. Although tailoring the circuit for a specific application provides the best performance and/or energy-efficiency, such approach lacks flexibility. E.g., if an error is found after the manufacturing, an expensive chip iteration is required. In addition, new functionalities cannot be added afterwards to support evolution of standards.

Flexibility can be obtained with software based implementation technologies. Unfortunately, general-purpose processors do not provide the energy-efficiency of the fixed-function circuit designs. A useful trade-off between flexibility and performance is implementation based on application-specific processors (ASP) where programmability provides the flexibility and computational resources customised for the given application provide the performance.

In this Thesis, application-specific processors are considered by using fast Fourier transform as the representative algorithm. The architectural template used here is transport triggered architecture (TTA) which resembles very long instruction word machines but the operand execution resembles data flow machines rather than traditional operand triggering. The developed TTA processors exploit inherent parallelism of the application. In addition, several characteristics of the application have been identified and those are exploited by developing customised functional units for speeding up the execution. Several customisations are proposed for the data path of the processor but it is also important to match the memory bandwidth to the computation speed. This calls for a memory organisation supporting parallel memory accesses. The proposed optimisations have been used to improve the energy-efficiency of the processor and experiments show that a programmable solution can have energy-efficiency comparable to fixed-function ASIC designs.