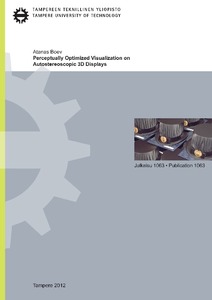 The family of displays, which aims to visualize a 3D scene with realistic depth, are known as "3D displays". Due to technical limitations and design decisions, such displays create visible distortions, which are interpreted by the human vision as artefacts. In absence of visual reference (e.g. the original scene is not available for comparison) one can improve the perceived quality of the representations by making the distortions less visible. This thesis proposes a number of signal processing techniques for decreasing the visibility of artefacts on 3D displays.
The visual perception of depth is discussed, and the properties (depth cues) of a scene which the brain uses for assessing an image in 3D are identified. Following the physiology of vision, a taxonomy of 3D artefacts is proposed. The taxonomy classifies the artefacts based on their origin and on the way they are interpreted by the human visual system.
The principles of operation of the most popular types of 3D displays are explained. Based on the display operation principles, 3D displays are modelled as a signal processing channel. The model is used to explain the process of introducing distortions. It also allows one to identify which optical properties of a display are most relevant to the creation of artefacts. A set of optical properties for dual-view and multiview 3D displays are identified, and a methodology for measuring them is introduced. The measurement methodology allows one to derive the angular visibility and crosstalk of each display element without the need for precision measurement equipment. Based on the measurements, a methodology for creating a quality profile of 3D displays is proposed. The quality profile can be either simulated using the angular brightness function or directly measured from a series of photographs. A comparative study introducing the measurement results on the visual quality and position of the sweet-spots of eleven 3D displays of different types is presented. Knowing the sweet-spot position and the quality profile allows for easy comparison between 3D displays. The shape and size of the passband allows depth and textures of a 3D content to be optimized for a given 3D display.
Based on knowledge of 3D artefact visibility and an understanding of distortions introduced by 3D displays, a number of signal processing techniques for artefact mitigation are created. A methodology for creating anti-aliasing filters for 3D displays is proposed. For multiview displays, the methodology is extended towards so-called passband optimization which addresses Moiré, fixed-pattern-noise and ghosting artefacts, which are characteristic for such displays. Additionally, design of tuneable anti-aliasing filters is presented, along with a framework which allows the user to select the so-called 3d sharpness parameter according to his or her preferences. Finally, a set of real-time algorithms for view-point-based optimization are presented. These algorithms require active user-tracking, which is implemented as a combination of face and eye-tracking. Once the observer position is known, the image on a stereoscopic display is optimised for the derived observation angle and distance. For multiview displays, the combination of precise light re-direction and less-precise face-tracking is used for extending the head parallax. For some user-tracking algorithms, implementation details are given, regarding execution of the algorithm on a mobile device or on desktop computer with graphical accelerator.