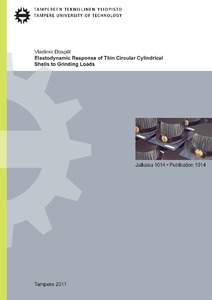 This thesis concentrates on mathematical modelling of a grinding system consisting of a grinding machine-tool and a thin-walled roll as a work piece. In this system the roll is subjected to process, grinding forces produced by the contact between the tool and the work piece. The model is presented in two versions. In the first the roll is modelled as a shell by utilizing Love’s equations, in the other one the roll is modelled as an Euler-Bernoulli beam. The mathematical representation of the system is based on principles of mechanics of continuum and cutting mechanics, which is expressed by a set of delay differential equations. These governing equations are solved numerically and the response is analyzed in time domain. First, the response is studied in the contact area, then the response is investigated along the whole span of the roll. The analysis is extended by a case, where the roll is supported by an additional support. The dynamic behaviour of the system is evaluated and the models based on two different theories are compared. Finally, technical recommendations that should lead to an improved dynamic performance of the studied system are addressed to industry.