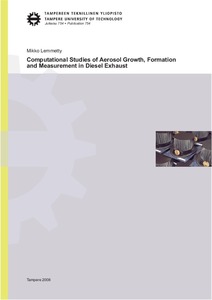 Epidemiological studies have shown a correlation between exposure to diesel exhaust aerosols and health problems. As diesel vehicles are widely used in traffic, and they are the most important contributor to the traffic aerosol emissions, the diesel aerosols from on-road engines constitute an important subject for aerosol research. The diesel aerosol from an on-road vehicle engine consists of two externally mixed modes with clearly different chemical compositions. The soot mode consists of carbonaceous, fractal-like particles with a diameter of 30‒200 nm, while the nucleation mode is mostly volatile, and has a geometric median diameter of 5‒30 nm. The emissions from mobile or stationary diesel power plants using medium or heavy fuel oil, which may have a considerable coarse mode and significantly different chemical charcteristics, are outside the scope of this study.

In recent years, the interest into the nucleation mode has been steadily growing, as it seems that the appearance of this particle mode is promoted by some modern vehicle technologies. Unlike soot mode, which is formed mainly during combustion, the nucleation mode experiences significant changes or is even formed during the dilution of the exhaust after the exit from the tailpipe. In this thesis, computational methods are developed for the study of the nucleation mode in diesel exhaust.

To improve the possibilities of the real-time measurement of the diesel exhaust, data reduction methodology of the Electrical Low-Pressure Impactor (ELPI) is developed, and a Bayesian algorithm is proposed for this purpose. The other objective of this thesis is the study of the growth and formation of the diesel exhaust nucleation mode during sampling and dilution. Tampere University of Technology Exhaust Aerosol Model (TUTEAM) and a simple, semi-empirical flow model are introduced to further this objective. In addition, we study the nucleation processes in diesel exhaust using classical nucleation theory for H2SO4‒H2O and NH3‒H2SO4‒H2O systems.

The numerical properties of the ELPI response functions are studied, and it is shown that using porous ELPI impactor plates has only a slightly negative effect on the ease of inversion. The proposed algorithm is shown to be able to fit bimodal size distributions if both modes have a geometric mean diameter of more than 30 nm.

Using TUTEAM, it is shown the classical model of homogeneous H2SO4‒H2O nucleation can give nucleation rates of the correct magnitude in most cases, and satisfactory quantitative reproductions of the aerosol size distributions are obtained for a set of measurements. However, some observations of the diesel exhaust nucleation mode reported in the literature cannot be explained using the homogeneous binary nucleation of sulphuric acid and water. The introduction of ammonia does not change this situation. Using classical model of ternary NH3‒H2SO4‒H2O nucleation changes the nucleation rates so little that the eventual effects will in practice be less than the uncertainties of the models. Only when the Selective Catalytic Reduction technology is used, the ammonia may have an observable effect on nucleation rates. The results reported in this thesis give a quantitative theoretical basis to believe that there are at least two processes responsible for the formation of diesel exhaust nucleation mode. This is in line with several contemporary experimental studies.