Statistical and Information Theoretic Approaches to Model Selection and Averaging 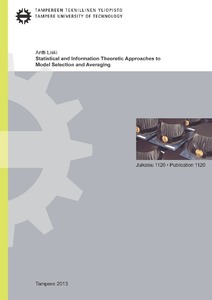 In this thesis we consider model selection (MS) and its alternative, model averaging (MA), in seven research articles and in an introductory summary of the articles. The utilization of the minimum description length (MDL) principle is a common theme in five articles. In three articles we approach MA by estimating model weights using MDL and by making use of the idea of shrinkage estimation with special emphasis on the weighted average least squares (WALS) and penalized least squares (PenLS) estimation. We also apply MS and MA techniques to data on hip fracture treatment costs in seven hospital districts in Finland.

Implementation of the MDL principle for MS is put into action by using the normalized maximum likelihood (NML). However, the straightforward use of the NML technique in Gaussian linear regression fails because the normalization coeffcient is not finite. Rissanen has proposed an elegant solution to the problem by constraining the data space properly. We demonstrate the effect of data constraints on the MS criterion and present a general convex constraint in data space and disscuss two particular cases: the rhomboidal and ellipsoidal constraints. From these findings we derive four new NML-based criteria. One particular constraint is related to the case when collinearity is present in data.

We propose an MA estimator with weights selected by the NML criterion. The resulting mixture estimator usually performs better than the corresponding MS estimator. We report on simulation experiments where the performance potential of MDL weight selection is compared with the corresponding potential of the AIC, BIC and Mallow's MA estimators. We also exploit the finding that a smoothing spline estimator may be rewritten as a linear mixed model (LMM). We present the NML criterion for LMM's and propose an automatic data-based smoothing method based on this criterion. The performance of the MDL criterion is compared to AIC, BIC and generalized cross-validation criteria in simulation experiments.

Finally we consider the sequential NML (sNML) criterion in logistic regression. We show that while the NML criterion becomes quickly computationally infeasible as the number of covariates and amount of data increases, the sNML criterion can still be exploited in MS. We also develop a risk adjustment model for hip fracture mortality in Finland by choosing comorbidities that have an effect on mortality after hip fracture.