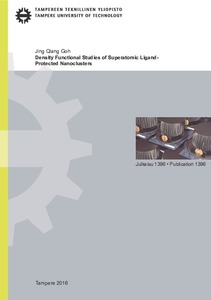 Ligand-protected nanoclusters (NCs), such as thiolate-protected gold NCs, have been of great interest for the nanoscience community because of their unique properties that can be realized in practical applications. This class of nanomaterials has interesting physical properties where a cluster can behave as if it was a single atomic-like entity. This unique feature is due to the delocalized electrons in clusters, in connection with the superatom model concept.

This thesis aims to address the applicability of the superatom model in different contexts for ligand-protected NCs. We employ density functional theory simulations to understand how the physical factors, such as structural modiﬁcation, can affect the underlying superatomic characters of clusters. The ﬁrst part of this thesis investigates two closely related gold NCs having the same biicosahedral motif for their cores (Au24 and Au25 cores), where they differ by a single gold atom only. Each icosahedron of the Au25 cluster represents a superatom, and this is a di-superatomic NC. Our analysis suggests that the absence of the central gold atom (the vertex-sharing atom in Au25 core) in the Au24 cluster does not modify the di-superatomic feature provided that they exhibit the same numbers of delocalized electrons.

The second part of this thesis studies a different class of clusters: ligand-protected silver sulﬁde NCs which have both metal and non-metal core atoms. Despite having core sulfur atoms that localize the delocalized electrons from silver atoms, silver sulﬁde NCs have superatomic states manifested in their conduction bands. Our analysis indicates that it is essential to have a predominant weight of Ag atoms in the core to generate superatomic features in silver sulﬁde NCs.

A further study on a silver sulﬁde NC with delocalized electrons, [Ag62S12(StBu)32]2+ cluster, demonstrates new insights for the role of core sulfur atoms. Superatomic state can exist in the valence band of the nanocluster, though the ordering of superatomic states differs from those predicted by the superatom model. This phenomenon can be ascribed to the localization of some (nominally) delocalized electrons induced by the core sulfur atoms.

Finally, we revisit the di-superatomic NCs and investigate their structural changes induced by electrooxidation. The delocalized electron counts of Au38(SC2H4Ph)24 and [Au25(PPh3)10(SC2H4Ph)5Cl2]2+ suggest that they are analogies of the di-atomic molecues F2 and Ne2. Upon electrooxidation, the core structure of the Au38 cluster remains stable, while the core structure of Au25 undergoes an irreversible change. The experimental and simulation results suggest that the redox behaviors of these NCs cannot be simply predicted based on the simple bonding scheme as suggested by the interaction of superatomic units. In contrast to the di-atomic molecules, structural factor needs to be considered in understanding the redox behaviors of di-superatomic NCs.