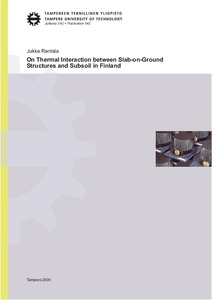 
Thermal interaction between the slab-on-ground structure of a heated building and the subsoil under varying temperature conditions is a complicated three-dimensional heat transport problem. Many state-of-the-art methods consider slab-on-ground­subsoil interaction to occur only between two boundary temperatures ­ the internal and external temperatures ­ ignoring the thermal effect of the subsoil itself and treating it merely as a conduction body in between. However, any building on subsoil or bedrock is built on a vast thermal storage reservoir with a relatively constant balance of heat: the earth's crust. Seasonal variations occur only close to the soil surface, and the thermal disturbance caused by a heated building on soil surface is marginal compared to the massiveness of the soil and rock volumes beneath it and the heat they can store.