Definition of electric and magnetic forces on Riemannian manifold 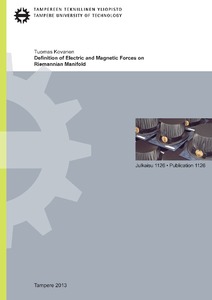 The precise relationship of electricity and magnetism to mechanics is becoming a critically important question in modern engineering. Although well known engineering methods of modeling forces in electric and magnetic systems have been adequate for bringing many useful technologies into our everyday life, the further development of these technologies often seems to require more extensive modeling. In the search for better modeling it is relevant to examine the foundations of the classical models.

A limitation in the classical notions of electric field intensity and magnetic induction is that they are sufficient to determine forces on only rigid objects. To allow for deformable objects the model needs to be combined with that of continuum mechanics. The notions suggested in this thesis are more general as they allow rigidity to be considered with respect to the test object itself, which may not be rigid in the usual sense.