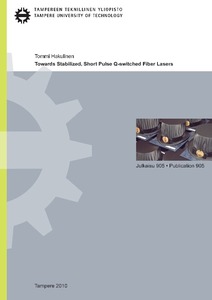 This thesis concerns stable repetition rate, Q-switched fiber lasers using semiconductor saturable absorber mirrors (SESAMs) as elements triggering pulse operation. The nonlinear reflectivity responses of the SESAMs have been extensively studied to optimize their performance for different temporal regimes. The results reveal that the effective saturation fluence depends strongly on the pulse width providing that the saturation fluence for Q-switched operation is set individually since it differs significantly from the value observed for other regimes, e.g. for mode-locking. A simple method for determining the absorption recovery time of a SESAM has been proposed, based on the measurements of the nonlinear response using a source with variable pulse width.

The recovery time of the SESAM was controlled by Ni-ion irradiation followed by appropriate thermal annealing. The combination of these processes allows an optimal balance between fast and slow components in absorption recovery to be achieved. Furthermore, thermal annealing reduces the undesirable nonsaturable loss caused by ion irradiation, and improves the SESAM’s long-term stability by removing short-lived defects.

A resonant SESAM with high modulation depth was used to achieve pulse width reduction. Such a saturable absorber mirror used in a short laser cavity resulted in demonstration of 8 ns pulses, which are the shortest pulses reported for passively Q-switched fiber lasers. The timing jitter of passively Q-switched fiber lasers is typically high and could reach tens of microseconds. An optically driven surface-normal modulator was used to ensure both passive Q-switching and stabilization of the pulse train, and resulted in substantial reduction of the timing jitter by a factor of 1.66×10³.

To summarize the main aims of this thesis, this study is focused on the efficient approaches towards a simple, fiber based pulse source emitting short, energetic pulses forming a stable pulse train. Such a pulse source lends itself to various applications in material processing, medical instruments and scientific research.