Analysis and Mitigation of Oscillator Impairments in Modern Receiver Architectures 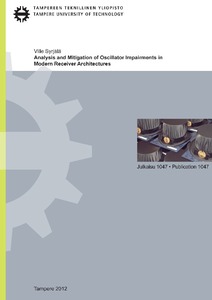 The ever-increasing complexity of radio devices is phenomenon fed by the ever-growing demands of users for higher data rates and more services from a single device. Today, advanced cellular phones have transceivers for reception of multiple different kinds of communications signals. Moreover, even reception of signals from a single communications system might require multiple transceivers, when the system utilizes multiple antennas or multiple frequency bands for transmission. At the same time, communications waveforms are getting more complex since more and more data should be transmitted in the same bandwidth. These highly dynamic signals set very tight demands for the quality of transceiver electronics. The above aspects are, on the other hand, in contradiction with the other strong demands of utilizing smaller, cheaper and less power consuming radio transceivers.
From the point-of-view of communications receiver design, the above demands are mapped to challenges of designing very simple receivers with high-quality output, or receivers that are very flexible to process many different signals at the same time but that are still relatively simple. One solution to the design of simple receivers with high-quality output is moving the complexity of devices from the analogue side to the digital side. This means using very simple receiver architecture, possibly with low-cost components, and using digital signal processing to compensate for the impairments caused by the simple design and the low-cost electronics. On the other hand, a solution to obtain a flexible and simple receiver is moving the sampling and analogue-to-digital interface as near to the antenna as possible, and processing the reception of wide spectrum in a single receiver. Naturally, this is also moving the complexity from the analogue side to the digital side. All this is also partially motivated by the well-known Moore’s law.
This thesis focuses on the both of the scenarios proposed above from the point-of-view of oscillator impairments in two modern receiver architectures, namely direct-conversion receiver architecture and direct-RF-sampling receiver architecture. Special emphasis is given to Orthogonal frequency division multiplexing (OFDM) signals since they are very vulnerable to phase-noise like effects and are very widely used nowadays. The direct-conversion receiver architecture is based on direct downconversion of signals from radio frequencies to baseband. The phase noise of the downconverting oscillator naturally causes errors to the signal in the downconversion process. In this thesis, the effects of the phase noise are analysed in OFDM communications link using downconverting oscillator with arbitrary phase-noise spectral shape. Also, existing algorithms for phase-noise mitigation in OFDM are reviewed and four new iterative digital-signal-processing based mitigation algorithms are proposed. The first algorithm is fairly simple, stemming from the idea of using linear interpolation between two common-phase-error estimates to obtain an estimate of the underlying time-varying phase characteristics. The second algorithm on the other hand is an extension to existing intercarrier-interference estimation method. Simply put, the idea is to improve the phase-noise estimates given by the existing algorithm with interpolation near the boundaries of OFDM symbols. The last two of the algorithms work in time-domain and are stand-alone algorithms. In both of them, an estimate of the received time-domain waveform is reconstructed after initial symbol detection, and the time-varying phase noise process is estimated from the received signal with the aid of the reconstructed waveform with various digital-signal-processing methods. The proposed algorithms are compared to the state-of-the-art algorithms in different scenarios with both transmitter and receiver phase noises present. In general, the proposed algorithms offer significant performance improvement over the state-of-the-art algorithms in the literature.
The contributions from the point-of-view of direct-RF-sampling receiver are in the modelling of sampling-jitter phenomenon in voltage sampling based and charge sampling based direct-RF-sampling receivers. Based on the analysis of the voltage-sampling based direct-RF-sampling receiver, OFDM phase-noise mitigation algorithms are proposed to be used in sampling-jitter mitigation. Furthermore, one reference tone based sampling-jitter mitigation algorithm is proposed. The proposed techniques are also compared to the state-of-the-art techniques, and the results show that clear performance improvements can be attained with the proposed techniques. Simulations are also carried out in the challenging case where nearby interferers are also considered present in the sampled signal, as is practical because of challenging implementation of RF filtering in high-frequency sampling. The results show that the proposed algorithms still manage to provide relatively good performance when interference level is reasonable. In addition to sampling-jitter mitigation algorithms, the analysis of charge-sampling based direct-RF-sampling receiver showed interesting filtering phenomenon in the spectrum of the error caused by the sampling jitter in some of the charge-sampler implementations. The phenomenon is so powerful that it should be taken into account in receiver design.