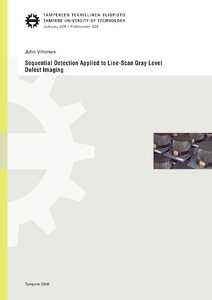 The detection of abnormal changes in the nominal characteristics of industrial applications is a problem typically related to the safety of the technological process and the quality of production. Given a record of measurements, the best solution is often the quickest detection possible of the occurrence of disorder, with as few false alarms as possible. Particularly in signal processing the ability to detect efficiently small changes in possibly long samples of data is of crucial importance. At the present, sequential algorithms are not generally used in image processing, while some of them operate as standards, e.g. in sampling-based inspection of goods. Perhaps one of the reasons is that no proofs of optimality, particularly for the so-called cumulative sum procedure, were available until quite recently. By taking data sequentially, one can deal with problems which have no fixed-size solutions or which at least are computationally prohibitive. Dynamic programming is also often important with intrinsically sequential problems.
Web inspection systems are utilized for electro-optical quality control in paper production lines. To be able to image the entire paper web accurately, such an inspection system may contain tens of cameras having built-in parallel processing for real-time detection and classification of defects and other surface flaws. The web inspection systems have no major difficulties in detecting large defects with high contrast. However, detection of physically small-sized defects having low contrast and unknown dynamics is far from easy under the strict constraints on the available processing time. At the expense of making sample size a random variable, the developed detector is shown to provide computationally inexpensive, yet effective performance in less simple cases that pose problems for current fixed sample size detectors. To meet the real-time requirements, we introduce extreme values as a valuable tool for reducing the data at hand. Even though both the sequential detection and dynamic programming are in some sense areas which are not very actively pursued today, the novel approach presented in this thesis will hopefully reawaken interest in these important fields.