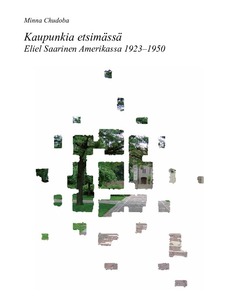 In my dissertation, Kaupunkia etsimässä – Eliel Saarinen Amerikassa 1923–1950 (Search for a City – Eliel Saarinen in America 1923–1950) Eliel Saarinen’s American career is described as a continuation of his career in Finland. The focus is on urban design and planning. Saarinen’s career as an urban planner may be followed from the Helsinki railway station (which inspired him to search for solutions to traffic problems) to street plans, international competitions and visionary designs for the future of Helsinki. In the latter, his urban design ideas may be seen in the largest scope of scales: from the city region to the details of housing design.
Also in the United States Saarinen’s career was marked by a design attitude that used a variety of scales. The city region was taken over by Saarinen in his organic decentralization, but at the same time he took notice of urban details and designed houses, interiors and textiles. In housing design Saarinen used the catalogue of attached houses that he had already researched in Finland, and did not see the need to rethink the spatial solutions to everyday living in his American rowhouse designs. Recurring themes throughout several decades were, for example, similar spatial arrangements in apartment plans, connections between interior and exterior, composition of street space, flowing traffic solutions with a hierarchy of streets and paths and taking into account the larger context connected to the design task. At the same time, the designs show Saarinen’s familiarity with the current urban discourse in the United States: block structure became more open and the hierarchical separation of various traffic forms was more important than before. The designer combined modernity with a knowledge of the past.
Saarinen was designing a city even when designing one building. Behind the attitude of controlling wholes was the idea of the city as a Gesamtkunstwerk, a total work of art. Saarinen saw the different phases of this idea during his career. In the Munkkiniemi-Haaga Plan he appeared as an artist, but in America he was confronted with a new kind of planning context: the problems of dense metropolitan cores and spreading suburbs. Saarinen’s solution to both problems was the gradual process of organic decentralization. The city planner’s role changed from an artist to the portrayer of processes. The urban region was looked at from above, but at the same time homes were designed and details drawn. Eliel Saarinen’s career was one of the most extensive examples of an urban application of the Gesamtkunstwerk idea.
The American legacy of Saarinen the urban designer consisted of a skyscraper model that influenced urban centers in the United States of the 1920s, the process of organic decentralization that aimed at creating order to metropolitan growth, and the idea of an architect’s pedagogical responsibility as an educator of the general public. Education could be furthered by books as well as thoughtfully designed environments. The roles of an urban planner, building designer and educator were all intertwined, as were the various scales of design work. In Eliel Saarinen’s designs all scale levels came together to form a whole, which was described by biological analogies in Saarinen’s writings. The city was an organism, and both the scalar hierarchies and the inspiration for form search were found in nature. Saarinen’s interpretation of the Gesamtkunstwerk idea evolved into an interaction and harmony of levels of scale, which guided his design process whether the task was objects or city regions. To his students he especially stressed the importance of taking into account the next higher scale level in design. Mastering scale levels had then – as well as now – an essential importance in architectural design processes.