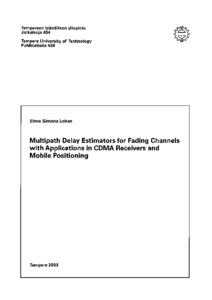 CDMA is the multiple access technique selected for the 3G mobile communications systems and it has a significant role in the research beyond 3G systems. CDMA systems over wireless channels have to cope with fading multipath propagation, which makes the channel estimation an important issue in CDMA receivers. Despite a significant amount of scientific literature on CDMA receivers, there are still open problems regarding the multipath delay and coefficient estimation in hostile environments and the design of low-complexity DSP-based channel estimators for CDMA applications. Good multipath delay estimation techniques can also find their applicability in mobile phone positioning, which is an area with many challenging questions. Additionally, theoretical measures of performance in CDMA detection in the presence of fading multipath channels have mainly been derived for ideal channel estimators. However, developing such analytical models in the presence of channel estimation errors can decrease significantly the computational time when analyzing the performance of different algorithms.


The research results presented in this thesis are focused on three main axes: channel estimation algorithms for low-complexity Rake receivers (with the main focus on the delay estimation part), code synchronization schemes for closely spaced multipath scenarios (including the applications in WCDMA positioning), and analytical studies of the performance of Rake receivers in the presence of multipath fading channels and delay estimation errors. First, the algorithms for the estimation of the main parameters of a fading channel are described, focusing on the channel complex coefficients and the multipath delays. The estimation of some other channel parameters (e.g., Doppler spread, noise variance) is briefly overviewed and a new channel estimation filter with adaptive filter length and fixed coefficients is derived. The problematics of closely spaced paths are emphasized and several solutions are proposed to deal with this situation. Second, two practical applications of the aforementioned channel estimation techniques are shown. The first one is a low-complexity Rake receiver based on interpolation, with incorporated channel estimation block. The second application is the mobile positioning, for which purpose several link-level solutions for the estimation of the delay of the first arriving path are presented. Third, we discuss the main techniques for the theoretical computation of the bit error probability (BEP) of a Rake receiver in the presence of multipath fading channels. The effects of the channel estimation errors on BEP analysis are also discussed. The last part of this thesis is a collection of nine publications that contain the main results of the author's research work. New algorithms and architectures for the multipath delay estimation in fading channels are introduced and their performance is studied under various CDMA scenarios. A semi-analytical method for computing BEP of a Rake receiver in the presence of code synchronization errors is also presented.