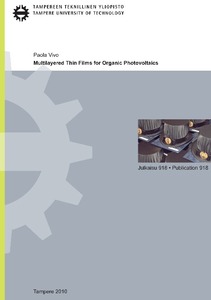 This work investigates the photoinduced interactions between different organic chromophores, thus identifying possible materials for organic photovoltaic applications. The intermolecular electron transfer (ET) in layered structures centered on a covalently bridged porphyrin–fullerene dyad (P–F) was studied by means of electrical and spectroscopic methods. When excited, the dyad initiates the vectorial ET in the films, and secondary processes take place after the charge separation between the porphyrin and fullerene moieties of P–F. This study showed that violanthrone-79 (V-79) and two different perylene derivatives (PDI and PTCDI) were capable to accept electrons from the photoinduced fullerene anion of P–F. Longer-lived electrical and spectroscopic signals were achieved when the film structures were expanded to multilayered configurations containing an electron-donor, the P–F dyad, and an electron-acceptor. The electron-donor material used was poly(3-hexylthiophene) (PHT).
The film deposition technique was switched from the Langmuir–Blodgett (LB) to Langmuir–Schäfer (LS) or thermal evaporation methods in order to achieve stronger photoelectrical signal amplitudes.
As a result of the information gained in the ET studies, photovoltaic devices were prepared based on the studied compounds. The photocurrent generated from the ultrathin film systems studied in this Thesis can be easily measured with a three-electrode photoelectrochemical cell. In fact, the deposition of a metal top-electrode on the solar cell would damage the underlying organics, thus leading to short-circuiting problems. However, since the liquid cells suffer of poor performances and low stability, it was aimed to build layered cells with a metal top-electrode. The first step in this direction was the optimization of the organics|top-electrode junction, in order to protect the thin organic films. This was achieved with the introduction of a thin tris-8-hydroxy-quinolato aluminum (Alq3) layer in the cell, which successfully enhanced both the efficiency and the lifetime of the devices.
Finally, multilayered cells based on a donor–acceptor pair sandwiched between an electron-donor and an electron-acceptor were developed, demonstrating that it is possible to design photovoltaic devices starting from the valuable information offered by the ET studies. The molecule chosen to this aim was the phthalocyanine-fullerene dyad, H2Pc–C60ee, which could be easily deposited as spin-coated layer.