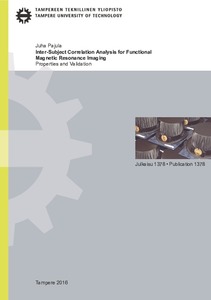 Inter-subject correlation (ISC) analysis for functional magnetic resonance imaging (fMRI)is a data driven approach to detect the brain activity during complex stimuli. TheISC measures are computed as a correlation between the fMRI time courses of thestudied group of subjects. The ISC analysis is developed especially for fMRI studies withnaturalistic stimuli, like movies, music, video games or annotated stories. The naturalisticstimuli are typically used to study the higher cognitive functions of a human brain suchas emotions or humor.

This thesis investigates the properties of ISC analysis for fMRI. Three major aspects ofthe ISC analysis were studied: the accuracy of the analysis when compared with thegeneral linear model (GLM) based analysis, the effects of spatial smoothing and the effectof sample size on the results. In addition, the openly available implementation of ISCanalysis that was used in this study, ISCtoolbox for Matlab, was improved by developinga built-in support for cluster computing environments. The improvements were publishedwith the new version of the ISCtoolbox. These improvements were mandatory due to thehigh computational costs of ISC analysis and the high number of ISC analyses requiredfor the studies of this thesis.

The ISC analysis was veriﬁed to be an effcient non-parametric data analysis method forfMRI data especially in studies with naturalistic stimuli. In addition to this the studiesindicated that ISC can successfully be applied also to the traditional block design data,where it is able to detect activations with similar accuracy as the GLM analysis. Thespatial smoothing was found to be a mandatory pre-processing step for the ISC analysis.When the thresholds for ISC results were corrected with false discovery rate multiplecomparisons correction, the ISC analysis was able to tolerate slightly larger Gaussiansmoothing kernels than the GLM analysis. The sample size investigation veriﬁed that theISC analysis can produce fairly stable results when the number of subjects included in thestudy was more than 20. At least 30 subjects were found to guarantee the high similarityof the results. The implementation of the ISC analysis as ISCtoolbox was found to behighly efficient in cluster computing environments.