On design and implementation of fingerprint-based biometric systems 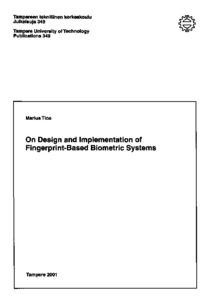 Fingerprints are graphical flow-like ridges present on human fingers. The formation of the fingerprints depends on the initial conditions of the embryonic development, and their ridge pattern is unchanged throughout the entire life. Since the first scientific studies of fingerprints in the mid-1800 till today no two fingerprints from different fingers have been found to have the same ridge pattern. A common hypothesis, confirmed by the experience accumulated during a century of forensic use of fingerprints, is that certain local discontinuities of the ridge pattern, called minutiae, are able to capture the invariant and discriminatory information present in the fingerprint image.


The present dissertation develops novel approaches for design and implementation of fingerprint-based biometric systems. Most of our work concentrates onto the design of fingerprint matching algorithms based on fingerprint minutiae, though the use of alternative features that may result in smaller fingerprint representations is also investigated.

The minutiae are usually detected in a thinned representation of the ridge pattern. Due to inherent artifacts induced during the enhancement and thinning operations, the minutiae detection process is characterized by a high false alarm rate; several structures detected as minutiae having no meaningful correspondent in the fingerprint image. Identifying the most common types of false minutiae structures, we develop an algorithmic procedure capable to recognize and cancel most of the false minutiae encountered in the fingerprint pattern.

We investigate the problems involved in the design of a minutiae-based fingerprint matching algorithm. A necessary foundation for achieving desired performance is to establish a realistic model of the variations that may be encountered between different impressions of the same finger. We assume a model that tolerates most of the situations which may occur in practice. Next, we introduce a new minutia representation that is invariant under the assumed model. The new representation allows us to identify the correspondences between minutiae from one fingerprint and minutiae from the another fingerprint, in order to evaluate the similarity degree between the two fingerprint impressions. Two different approaches of corresponding minutiae identification are proposed. The first one collects corresponding pairs among the most similar minutiae under the constraint that a minutia from one impression can be paired with at most one minutia from the another impression. The second approach of corresponding minutiae identification estimates first the pose transformation between the two fingerprint impressions, following then to collect corresponding pairs under certain geometric constraints.

Finally we investigate the use of features extracted from the wavelet transform of the fingerprint image, as an alternative to minutia details. The motivation underlying this study is the need to reduce both the complexity of the feature extraction module, as well as the size of the fingerprint representation. We show throughout several experiments that the use of the proposed features for fingerprint recognition is a promising approach.