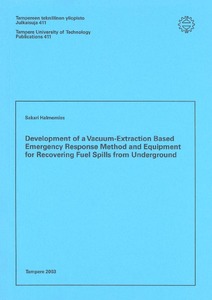 The most common type of accident is a fuel spill on the ground, which, depending on the circumstances can cause serious pollution of soil and groundwater. When fuel has seeped into the soil, there are not many effective response methods available for fire departments. The current practice mainly involves occasional pumping from ground pits, excavation and transportation of soil for treatment on landfills. Because fire departments are usually first to arrive at the scene of an accident, they could minimize the consequences of accidental fuel spills by implementing a first-responder system. A first-response remediation system should be not only effective but also relatively simple to implement and rapid.

The general objective of this study was to develop a vacuum-extraction based response method and equipment for fire departments to use in treating fresh fuel spills. The procedure developed enables volatile fuels to be recovered in both liquid and vapor forms, liquids can be separated from vapors, and vapors are destroyed by controlled incineration. The development work comprised experiments at four different scales:
1. Laboratory-scale column experiments were conducted to test the concept of the vacuum-extraction based response, the so-called Power Slurping Response (PSR), applied to fresh spill, and to provide data on the relative effects of different variables on yields when recovering fuels from different soil types.
2. Seepage and retention experiments were conducted in larger columns to determine seepage velocities of fuels in different soils and capacities of soils to retain fuels.
3. Large-scale tank experiments were to test extraction on a larger scale and to develop the response equipment.
4. Basin experiments were to test PSR at a field scale and to finalize the development of the response equipment. The main components were suction pipes with hoses, a collecting vacuum tank, an incinerator, and a temporary basin for collecting fuels as liquid.

The column experiments indicated that it was possible to recover up to 80 - 90 % of fresh fuel (diesel and gasoline) as liquids and vapors by vacuum suction, and hence to reduce fuel concentrations in soil (sand and till) to levels below its retention capacity. Increases in soil temperature, soil moisture content and air-flow rates resulted in greater recoveries. Moreover, periodic pulsing of compensation air increased fuel recoveries.

The tank and basin experiment proved that vacuum extraction worked even at a larger scale. The yields varied between 55-82 % for gasoline and 30-40 % for diesel fuel from gravely sandy soil. In the basin experiments gasoline was extracted from gravely sand under both summer and winter conditions, and because of the applied vacuum, gasoline was recovered mainly as vapors. The basin experiments showed that application of a strong vacuum extraction to a fresh fuel spill for two hours immediately after leakage, makes it possible to recover the fuel that cannot be retained by the soil. In this way even groundwater pollution could be prevented, thereby avoiding the need for lengthy and expensive remediation efforts in the future. PSR is most suitable for gasoline-like fuels in permeable soils, where groundwater pollution can take place within a few hours. The SAMI response equipment was designed as a self-contained unit that can be transported readily to the accident site and which can be fully operational within approximately 15 minutes of the arrival of first response emergency services.