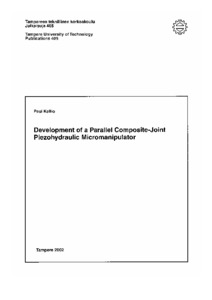 This thesis discusses the development of a novel parallel composite-joint piezohydraulic micromanipulator. The micromanipulator is composed of three prismatic actuators connected in parallel. The actuators are new piezohydraulic actuators, where the deformation of a piezoelectric disk is transformed into a linear displacement using hydraulic oil and a bellows. Three bellows, which are able to elongate along their longitudinal axis and bend about the other two axes, form the kinematic chains of the micromanipulator. Since the bellows is a monolithic element and possesses both translational and rotational degrees of freedom, that micromanipulator is composed of composite joints.The constructed piezohydraulic micromanipulator is the first parallel structure which is composed of composite joints and thus, does not need separate revolute, universal, spherical or prismatic joints. This is a beneficial feature in the fabrication and assembly of miniaturised micromanipulators.The micromanipulation system consists of five subsystems: the micromanipulator, a control system, a vision system, a signal processing system and accessories. The emphasis of this thesis is on the structure and experimental evaluation of the micromanipulator and the piezohydraulic actuator and on the development of position feedforward and position feedback control schemes. The position feedforward control is based on the inverse position kinematic equations. The thesis presents two inverse position kinematic models: a first generation model and a second generation model, the latter providing slightly better results in the feedforward control scheme.Two inverse Jacobian matrices are derived from the inverse position kinematic models. The second generation model is used in a vision-based control scheme and the first generation model in a Hall-sensor-based control scheme. Both control schemes are decentralised task space control schemes, which are composed of the position measurement system, independent single-input / single-output controllers for each joint and a static nonlinear decoupling element the inverse Jacobian.The micromanipulator controlled using the vision-based position feedback control scheme possesses the following performance:- steady-state accuracy of ± 1 pixel in the xy plane. With the 100x magnification: 1,7 micrometres and 3,3 micrometres along the x and y axis, respectively;- repeatability of 1 and 2,5 micrometres along the x and y axis, respectively with the 100x magnification;- resolution of nanometres;- an ellipsoid workspace, the length of the semi-axes of which are 250 µm x 250 µm x 100 µm;- sampling frequency of 18 Hz.The Hall-sensor-based control scheme provides the same resolution and workspace. It possesses a limited accuracy of 20 micrometres but it can be employed at significantly higher speeds than the vision system. Therefore, the future implementation can be a system, where the Hall sensor measurement is used for high-speed course positioning and the vision system for precise positioning to move the end-effector close to the target.