Performance and Reliability of Polymer-based Sensor Packages at High Temperatures 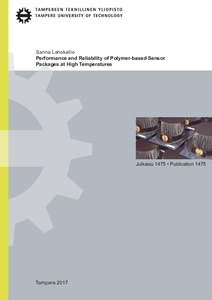 Electronics is increasingly used in many applications. In addition to new consumer electronics, there is a trend to implement electronics and sensors in many industrial applications, which often requires improved reliability in very demanding conditions. This thesis concerns the effect of high temperature on electronics packages. High temperature tends to accelerate chemical reactions, aging of materials and thereby also failures. Properties of polymer materials, which are often used in electronic packaging, are heavily temperature-dependent. They are, however, very versatile and compatible materials which are readily available and easy to manufacture compared to expensive high-temperature speciality materials such as ceramics. Therefore, using polymers at high temperatures would be highly beneficial. However, it is crucial to understand the effects of high temperature on polymer materials before they are used.

The temperature of 180°C seemed to be low enough not to cause reliability problems in the polymer-based packages studied. Additionally, a good performance in thermal cycling testing up to 180°C was achieved. At 200°C degradation was seen on the surfaces of the polymer materials and their mechanical properties gradually declined. Good electrical performance was nevertheless achieved with suitable material choices. A temperature of 240°C was shown to be too high for extended exposure of the materials studied. With careful material choices relatively good electrical performance was achieved, but FTIR showed dramatic and rapid degradation with most of the polymerbased materials at this temperature. The degradation was much more severe than at 200°C, and the mechanical properties also showed drastic impairment at 240°C.

Material selection was shown to be absolutely critical for the reliability of the whole polymer-based package. With poor PCB material interconnections failed much earlier than with more stable PCB materials. Additionally, ECA selection was also important. This thesis showed that polymer-based electronic packages can withstand high temperatures, especially for limited exposure times. However, it is crucial that all materials present are able to withstand the selected temperatures.