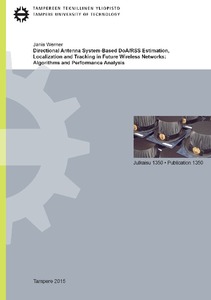 Location information plays an important role in many emerging technologies such as robotics, autonomous vehicles, and augmented reality. Already now the majority of smartphone owners use their devices' localization capabilities for a broad range of location-based services. Currently, location information in smartphones is mostly obtained in a device-centric approach, where the device to be localized, here referred to as the target node (TN), estimates its own location using, for example, the global positioning system (GPS). However, TNs with wireless communication capabilities can be localized based on their transmitted signals by a third party. In particular, localization can be implemented as a functionality of a wireless network. Depending on the application area and implementation, this network-centric approach has several advantages compared to device-centric localization, such as reducing the energy consumption within the TNs, enabling localization of non-cooperative TNs, and making location information available in the network itself. Current generation wireless networks are already capable of coarse localization. However, these existing localization capabilities do not suffice for the challenging demands of future applications. The majority of approaches moreover does not exploit the fact that an increasing number of base stations (BSs) and user devices are equipped with directional antennas. However, directional antennas enable direction of arrival (DoA) estimation that can, in turn, serve as the basis for advanced localization and location tracking. In this thesis, we thus study the application of directional antennas for localization and location tracking in future generation wireless networks. The contributions of this thesis can be grouped into two topics.

Second, this thesis deals with localization based on the fusion of DoA and RSS estimates as well as DoA and time of arrival (ToA) estimates. It is shown that the combination of these estimates can result in a much increased localization performance compared to a localization based on one of these estimates alone. For the localization based on DoA/RSS estimates, a mechanism explaining this improvement is revealed by means of a CRB analysis. Thereafter, DoA/RSS-based fusion is further studied using an extended Kalman filter (EKF) as an example location tracking algorithm. Finally, an EKF is proposed that tracks the location of a TN by fusing DoA and ToA estimates. Apart from a significantly improved tracking performance, this joint DoA/ToA-EKF moreover provides estimates for the TN device clock offset and is able to localize the TN in situations where a classical DoA-only EKF fails to provide a location estimate altogether.