On design and comparison of on-chip networks 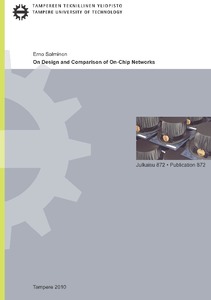 This thesis focuses on the design of on-chip communication networks and methods for benchmarking them. Network-on-Chip (NoC) paradigm seeks to achieve greater design productivity and performance in large integrated circuits. Such systems include heterogeneous set of components that have different requirements for communication.
This thesis presents simulation-based evaluation methods for NoCs. In addition, several detailed guidelines are given in order to promote disciplined NoC benchmarking. Discussion starts with thorough surveys of 60 existing NoCs and over 40 evaluation studies. The presented benchmarking methodology relies on abstract workload models based on task graphs. They are executed with a Transaction Generator (TG) that sends and receives data to/from the benchmarked NoC and collects statistics. TG was used in several configurations and was essential part for completing this work. The error in time estimates was mostly below 10% whereas the speedup against cycleaccurate HW/SW co-simulation was over 200x.
Heterogeneous IP Block Interconnection (HIBI) was designed to obtain a topologyindependent, scalable, and still high-performance network for integrating intellectual property blocks. Six other NoCs were implemented for reference and benchmarked with HIBI in various configurations and using multiple workloads. Over 30 published implementation results were gathered. Furthermore, several FPGA prototypes were implemented and they confirmed the utility of HIBI in multiprocessor environment. In general, HIBI and 2-D mesh performed better than others in the presented cases considering the trade-off between area and throughput.
The main goals of the work were met. The presented methodology along with TG has been adopted by an OCP-IP workgroup that is seeking to standardize NoC benchmarking methods.