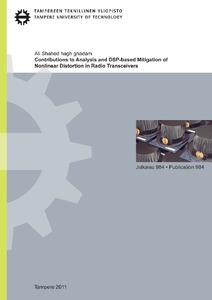 This thesis focuses on different nonlinear distortion aspects in radio transmitter and receivers. Such nonlinear distortion aspects are generally becoming more and more important as the communication waveforms themselves get more complex and thus more sensitive to any distortion. Also balancing between the implementation costs, size, power consumption and radio performance, especially in multiradio devices, creates tendency towards using lower cost, and thus lower quality, radio electronics. Furthermore, increasing requirements on radio flexibility, especially on receiver side, reduces receiver radio frequency (RF) selectivity and thus increases the dynamic range and linearity requirements. Thus overall, proper understanding of nonlinear distortion in radio devices is essential, and also opens the door for clever use of digital signal processing (DSP) in mitigating and suppressing such distortion effects.
On the receiver side, the emphasis in this thesis is mainly on the analysis and DSP based compensation of dominant intermodulation distortion (IMD) effects in wideband direct-conversion receiver (DCR). The DCR structure is studied in the context of wideband flexible radio type of concepts, such as software-defined radio (SDR) and cognitive radio (CR), where minimal selectivity filtering is performed at RF. A general case of wideband received waveform with strong blocking type signals is assumed, and the exact IMD profile on top of the weak signal bands is first derived, covering the nonlinearities of low-noise amplifier (LNA) as well as the small-signal components, like mixers and amplifiers in the in-phase (I) and quadrature-phase (Q) branches of the receiver. Stemming from the derived interference profiles, a versatile DSP-based adaptive interference cancellation (IC) structure is then proposed to mitigate the dominant IMD components at the weak signal bands. Furthermore, the issue of RF-local oscillator (LO) leakage in mixers is addressed in detail, creating in general both static as well as dynamic direct current (DC) offset type of interference at the desired signal band. Using proper receiver and signal modeling, a blind DSP-based method building on independent component analysis (ICA) is then proposed for suppressing such interference, especially due to strong blocking signals, in multi-antenna diversity receivers. Altogether, both computer simulations as well as measured real-world radio signals are used to verify and demonstrate the operation of the proposed algorithms.
On the transmitter side, the major source on nonlinearity in radio devices is the RF power amplifier (PA). In general, nonlinear PAs possess superior power efficiency compared to linear PAs, but generate also interfering spurious distortion components at the transmitter output. Methods to mitigate such interference, both in-band and out-of-band, also known as linearizers, are highly active research area, and is also the second main theme of this dissertation manuscript. More specifically, the work in this thesis focuses on the so-called feedforward (FF) PA linearizer, which is building on identifying and subtracting the spurious frequency components at and around the PA output. Such FF linearizer can in principle handle wideband transmit waveforms and PA memory, but is also basically sensitive to certain component mismatches in the linearization loops. In this thesis, a closed-form expression relating such component inaccuracies and the achievable linearization performance is derived, being applicable with both memoryless core PAs and core PAs with memory. Furthermore, as one of the main thesis contributions, a so-called DSP-oriented feedforward linearizer (DSP-FF) is proposed in this thesis, which is a versatile implementation where the core of the linearization signal processing is carried out in digital domain at low frequencies, opposed to more traditional all-RF linearizers. Also efficient parameter estimation algorithms are derived for the proposed DSP-FF structure, building on least-squares (LS) model fitting and widely-linear (WL) filtering. Furthermore, the large sample performance of the proposed parameter estimation methods, and there on of the overall linearizer in terms of the achievable IMD attenuation, are derived covering both memoryless PAs and PAs with memory. Overall, extensive computer simulations as well as proof-of-concept type radio signal measurements are used to demonstrate and verify the analysis results as well as the proper operation of the overall linearizer.