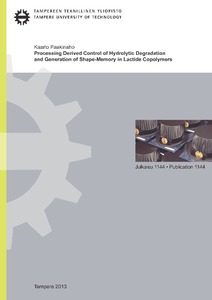 Polylactide and lactide copolymer implants are advantageous in the sense that they are absorbed out of the body, after fulfilling their function as a temporary support for the damaged tissue. For a predictable performance in the physiological environment, the key factors affecting the hydrolytic degradation and their relationship to the manufacturing process should be well known and controlled. Prior to a significant hydrolytic degradation, the physiological environment affects the thermal properties of lactide-based polymers. This phenomenon can be exploited with orientation-based polymer processing methods in order to develop actively moving polymers. The main aims of this thesis was to study the effects of melt-extrusion on the thermal degradation of lactide copolymers, the effects of melt-processing on the hydrolytic degradation at the physiological temperature and the generation of a water-induced shape-memory on lactide copolymer using orientation-based polymer processing. The main focus in the degradation study was the generation of lactide monomer in the extrusion process and the hydrolysis-catalysing effect of the lactide monomer on poly(L/D-lactide) 96L/4D and poly(L-lactide-co-glycolide) 85L/15G. The study of the generated water-induced shape-memory for amorphous poly(D,L-lactide) focused on demonstrating the properties, mechanism and efficacy of the shape-memory. Results showed that during melt-extrusion the polymers degraded due to high shear stress and high melt temperatures. The degradation in the melt generated lactide monomer into the polymer, which significantly affected the hydrolytic degradation in vitro. The degradation rate was directly proportional to the lactide concentration of the polymer and even small quantities of lactide monomer (0.05-0.20 wt-%) were found to affect the retention of mechanical properties in vitro at 37 °C. Mass loss, crystallinity and dimensional stability were also found to be affected. The orientation-programming process generated an oriented temporary structure for poly(D,L-lactide) that was able to transform its shape at 37 °C in an aqueous environment without any external energy and to further adapt to a predefined stress level as a result of stress generation or relaxation. In an aqueous environment at the physiological temperature, the shape-memory is activated by the plasticizing effect of water molecules diffused into the oriented polymer matrix causing a directed relaxation of oriented and preloaded polymer chains. Although the shape-transformation was slow, the efficacy of the shape-memory was demonstrated with shape-memory nails in a pull-out test in which the pull-out force of the nails increased 360 % during a seven day test period in vitro at 37 °C. The results clearly show that functionality in terms of shape-memory can be generated in suitable bioabsorbable polymers without tailoring the polymer chain structure, and thus shortening the time from the development of the technology to its utilization in medical devices.