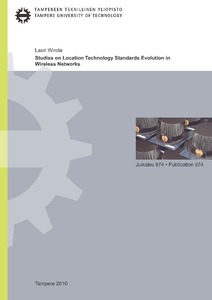 Positioning capability in mobile terminals (phones, laptops, netbooks) is required for various purposes including location-based commercial services, navigation and local search. Other uses include positioning of emergency calls and cellular networks also have internal use for the UE (User Equipment) location information. Moreover, the law and enforcement authorities have needs for positioning terminals and persons carrying them.

A variety of techniques to position a mobile UE is available in the cellular networks. The first category of methods includes utilizing the cellular base station coverage area information and combining that with distance estimates to the base stations. The distance estimates may be based on time delay, time difference or received signal strength measurements. The methods are discussed especially in the context of information they require from the cellular network.

The second category consists of using wireless networks to assist GNSS-based (Global Navigation Satellite System) methods. In the work the physics and prerequisites of the GNSS-based positioning methods are discussed and the significance of the assistance obtainable from the telecommunications networks is highlighted. The assistance is shown to significantly improve time-to-first-fix and sensitivity of the Assisted GNSS receiver.

The study introduces the positioning architectures and protocols in the 3GPP GERAN, UTRAN and E-UTRAN networks known as GSM, 3G and 4G in everyday language, respectively. It is shown that within each network there are dedicated logical and/or physical entities for positioning purposes and their significance to the introduced positioning methods is discussed.

In the discussion emphasis is given on the GERAN control plane positioning protocol called Radio Resource LCS Protocol (LCS for Location Services) also known as RRLP. Especially the GNSS-branch of RRLP is detailed, because its structure has also been copied to UTRAN and also to some extent to the E-UTRAN positioning protocols. It is shown that the generic GNSS structure in RRLP has made it straightforward to add the support for new GNSSs as they emerge. RRLP currently supports GPS in its entirety, GLONASS, QZSS, Galileo and various SBASs. In addition, the location protocol defined for the user plane, OMA SUPL (Open Mobile Alliance Secure User Plane Location protocol), is described and its relation to the 3GPP-defined positioning protocols is discussed.

Radiomap-based and fingerprint-based methods are also shown not to be covered adequately by the current positioning standards. Introducing the support for these methods is seen as an important milestone towards increasing the availability of the positioning services and solving the indoor positioning challenge. The thesis outlines protocol requirements for these methods as well.

Finally, costs and benefits of the proposed new positioning methods are critically analyzed. Considerations include accuracy, availability and bandwidth aspects. It is found that, in general, accuracy requirements also increase bandwidth consumption. This implies that the development of the new features should be concentrated in the user plane. Hence, OMA SUPL Release 3 together with the extended E-UTRAN positioning protocol are seen as the most promising platforms for introducing new positioning technologies into the wireless positioning standards. Moreover, the outlined standardization roadmap shows that the proposed features are realizable in the near future.