Particle and NOx emissions from a HVO-fueled diesel engine 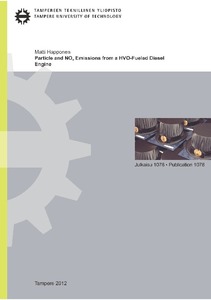 
Happonen, Matti
Tampere University of Technology
This publication is copyrighted. You may download, display and print it for Your own personal use. Commercial use is prohibited.

Concerns about oil price, the strengthening climate change and traffic related health effects are all reasons which have promoted the research of renewable fuels. One renewable fuel candidate is diesel consisting of hydrotreated vegetable oils (HVO). The fuel is essentially paraffinic, has high cetane number (>80) and contains practically no oxygen, aromatics or sulphur. Furthermore, HVO fuel can be produced from various feedstocks including palm, soybean and rapeseed oils as well as animal fats. HVO has also been observed to reduce all regulated engine exhaust emissions compared to conventional diesel fuel.

In this thesis, the effect of HVO fuel on engine exhaust emissions has been studied further. The thesis is roughly divided into two parts. The first part explores the emission reductions associated with the fuel and studies techniques which could be applied to achieve further emission reductions. One of the studied techniques was adjusting engine settings to better suit HVO fuel. The settings chosen for adjustments were injection pressure, injection timing, the amount of EGR and the timing of inlet valve closing (with constant inlet air mass flow, i.e. Miller timing). The engine adjustments were also successfully targeted to reduce either NOx or particulate emissions or both. The other applied emission reduction technique was the addition of oxygenate to HVO fuel. The chosen oxygenate was di-n-pentyl ether (DNPE), and tested fuel blend included 20 wt-% DNPE and 80 wt-% HVO. Thus, the oxygen content of the resulting blend was 2 wt-%. Reductions of over 25 % were observed in particulate emissions with the blend compared to pure HVO while NOx emissions altered under 5 %.

On the second part of this thesis, the effect of the studied fuels on chosen surface properties of exhaust particles were studied using tandem differential mobility analyzer (TDMA) techniques and transmission electron microscopy (TEM). The studied surface properties were oxidizability and hygroscopicity. The oxidation properties were compared between soot particles emitted with HVO and with conventional diesel. The effects of fuel on hygroscopicity, on the other hand, were compared between HVO and oxygenated HVO fuel. In general, no considerable differences were observed in the exhaust particle surface properties due to the change of fuel.