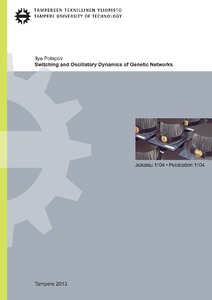 Bi-stable and periodic behaviors are present in living beings. Mechanisms capable of bi-stability provide organisms with the means to choose between states, while cyclic systems can be used to track time, and thus regulate periodic processes in cells, allowing, for example, adaptability to the day-night cycle.

In general, the switching behavior reflects the ability of decision making, which is vital in changing environments. On the other hand, processes with periodic dynamics, such as the circadian clock and the cell cycle, are necessary to time the occurrence of specific actions and processes. Complex behaviors, such as switching between states and oscillatory dynamics, are made possible by networks of interactions between cellular components, at the molecular level.

Many essential functions in living cells are regulated by complex networks. One such network, perhaps the most vital one, is the genetic regulatory network, composed of genes and the products of their expression. This network is capable of responding to other chemical substances present in a cell as well. Associations between genes, correlating their expression, are able to generate complex dynamical patterns, not possible by individual genes.

Aside from characterizing the structure of natural genetic networks, another effort that is being made to better understand them consists of engineering artificial genetic motifs that are commonly found in the natural networks. In this way, it is possible to study their dynamics without the interference of many external signals that the native motifs are subject to. Simultaneously, in silico models matching the kinetics of the artificial motifs have been developed, so as to explore their dynamics in various conditions.

In silico models can be used to predict the behavior of the natural system. Recently, their complexity has increased significantly, so as to account realistically for novel findings on the role that a gene's sequence and events in transcription and translation elongation have on the dynamics of genetic circuits. Similar developments have been made so as to study the effect of cell-to-cell communication on the dynamics of cells living within communities.

In this thesis we study the dynamics of in silico models of genetic toggle switches and oscillators. Namely, we implement delayed stochastic models at the nucleotide and codon levels to study sequence dependent properties of these circuits. Also, we implement a deterministic model of a genetic oscillator in the context of cell populations to investigate how, from the coupling between cells, emerges novel collective dynamics, including the synchronization of processes. The results impact on the ongoing efforts to better understand how cells regulate and modulate their key physiological processes and provide clues on how to better engineer synthetic circuits to regulate processes in cells.