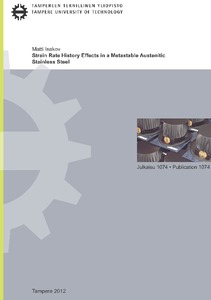 The mechanical behavior of metastable austenitic steels can be relatively complex in terms of temperature and strain rate sensitivity. This is connected to their low stacking fault energy and tendency towards martensitic transformations, which affect the dislocation slip characteristics and microstructural evolution in these materials during deformation. In this study, it is presented that the complex material behavior often reported in the literature can be rationalized in terms of the classical division of strain rate effects into instantaneous and evolutionary effects, which leads to the concept of strain rate history dependence. The behavior of metastable austenitic stainless steel EN 1.4318 was studied on the basis of this assumption. This thesis focuses on the mechanical testing at various strain rates and temperatures, but supplemental microstructural characterization results are presented in order to reveal the connection between the mechanical behavior and the microstructure.
The mechanical tests involved measurements of the material behavior at strain rates ranging from 2•10⁻⁴ s⁻¹ to 10³ s⁻¹ at temperatures -40 °C, +24 °C, and +80 °C. Low strain rate testing at strain rates below 10⁰ s⁻¹ was carried out with a servohydraulic materials testing machine, while high rate testing at 10³ s⁻¹ was done with a Tensile Hopkinson Split Bar (THSB) apparatus. Modifications that enabled rapid strain rate changes were introduced to the THSB setup. A momentum trap bar based modification was utilized in the measurement of the instantaneous strain rate sensitivity in the high rate region. Another modification involved the incorporation of a screw-driven low rate loading device to the THSB setup, which facilitated a change of over six decades in the specimen strain rate without the need of unloading the specimen and changing the test equipment. Microstructural characterization was based on the measurement of α’ martensite content in the deformed specimens using magnetic methods (Feritscope) and inspection of the deformation microstructures with a scanning electron microscope using the Electron Backscattered Diffraction analysis.
The test results clearly demonstrate the soundness of the adopted approach. The apparent strain rate sensitivity deduced from the constant strain rate tests is negative due to the negative strain rate sensitivity of the strain hardening rate, which can be related to the reduced tendency of austenite to transform into α’ martensite at higher strain rates. In contrast, the instantaneous strain rate sensitivity is positive throughout the studied strain rate and temperature ranges, but shows a connection to the austenite stability. Moreover, the tests based on rapid strain rate changes reveal that the strain hardening and α’ martensite transformation rates decrease immediately after the strain rate increase. This feature cannot be explained solely by the macroscopic adiabatic heating, which in the literature is often used to explain the reduction of the transformation rate. An alternative explanation is sought from localized material heating taking place in the vicinity of newly formed α’ particles, which inhibits their further growth and coalescence. The existence of other inhibiting effects of strain rate on the α’-nucleation cannot, however, be excluded at this point.