Photoinduced Electron Transfer in Dyads and Triads of Porphyrins, Phthalocyanines and Fullerenes 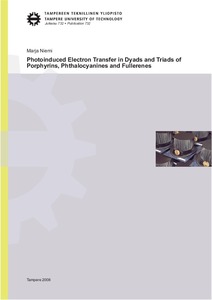 Photoinduced electron transfer of several dyads and triads consisting of porphyrins or phthalocyanines as electron donors and fullerene as acceptor was studied. Efficient electron transfer was observed in the studied compounds due to two important approaches in the design of the molecular structure: (i) appropriate selection of the donor and acceptor moieties and (ii) controlled orientation and distance of the moieties achieved with two covalent linkers connecting the donor and acceptor.
Mainly spectroscopic methods were used to determine the reaction schemes of the photoinduced reactions. Time-resolved spectroscopy revealed the transient states of electron transfer and it was confirmed that the intermediate exciplex state precedes the charge-separated state in all the studied compounds. Rate constants of the transitions and energies of the states were evaluated in both polar and non-polar solvents.
To test the possibility to use the studied compounds in solid state photovoltaic devices, thin films with porphyrin-porphyrin-fullerene triad structures were attached on glass substrates covered with a transparent indium tin oxide layer. The triad structures were obtained by building successive self-assembled monolayers (SAM) of porphyrin and porphyrin-fullerene dyad on top of each other. Because of the presence of the secondary electron donor, the triad structures were found to enhance both photocurrent and photovoltage generation compared to the corresponding porphyrin-fullerene dyad SAM.