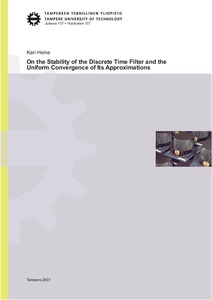 
It has been pointed out by several authors that the ability to approximate the filter in a uniformly convergent manner is closely related to the stability of the exact filter with respect to its initial conditions. This relation is manifested in the literature by results stating that under some assumptions a stable filter admits uniformly convergent approximations. This thesis addresses both of the above mentioned problems, the stability of the discrete time filter with respect to its initial conditions and the uniform convergence of certain filter approximations.


The uniform convergence is proved for a general class of filter approximation methods and in particular, it is shown that the conditions are satisfied by a certain auxiliary particle filter type algorithm and by a certain sampling/importance resampling filter type sequential Monte Carlo algorithm. These algorithms are assumed to employ either the multinomial resampling scheme or the tree based branching algorithm. The uniform convergence is obtained with respect to the sample size but because the computational cost of these filter approximation algorithms is determined by the sample size, the convergence is also uniform with respect to the computational cost. Moreover, the uniform convergence results are illustrated by some computer simulations.