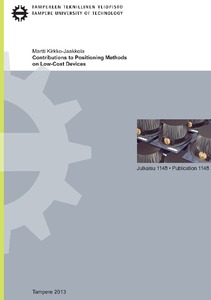 Global Navigation Satellite System (GNSS) receivers are common in modern consumer devices that make use of position information, e.g., smartphones and personal navigation assistants. With a GNSS receiver, a position solution with an accuracy in the order of five meters is usually available if the reception conditions are benign, but the performance degrades rapidly in less favorable environments and, on the other hand, a better accuracy would be beneficial in some applications.

This thesis studies advanced methods for processing the measurements of low-cost devices that can be used for improving the positioning performance. The focus is on GNSS receivers and microelectromechanical (MEMS) inertial sensors which have become common in mobile devices such as smartphones. First, methods to compensate for the additive bias of a MEMS gyroscope are investigated. Both physical slewing of the sensor and mathematical modeling of the bias instability process are considered. The use of MEMS inertial sensors for pedestrian navigation indoors is studied in the context of map matching using a particle filter. A high-sensitivity GNSS receiver is used to produce coarse initialization information for the filter to decrease the computational burden without the need to exploit local building infrastructure. Finally, a cycle slip detection scheme for stand-alone single-frequency GNSS receivers is proposed.

Experimental results show that even a MEMS gyroscope can reach an accuracy suitable for North seeking if the measurement errors are carefully modeled and eliminated. Furthermore, it is seen that even a relatively coarse initialization can be adequate for long-term indoor navigation without an excessive computational burden if a detailed map is available. The cycle slip detection results suggest that even small cycle slips can be detected with mass-market GNSS receivers, but the detection rate needs to be improved.