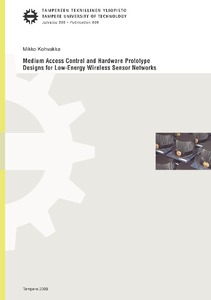 This Thesis focuses on low-energy WSNs targeting to long network lifetime. The main research problem is the combination of adaptive and scalable multi-hop networking with constrained energy budget, processing power, and communication bandwidth. The research problem is approached by energy-efficient protocols and low-power sensor node platforms.

The main contribution of this Thesis is an energy-efficient Medium Access Control (MAC) design for TUTWSN (Tampere University of Technology Wireless Sensor Network). The design comprises channel access and networking mechanisms, which specify data exchange, link synchronization, network self-configuration, and neighbor discovery operations. The second outcome are several low-power sensor node platforms, which have been designed and implemented to evaluate the performance of the MAC design and hardware components in real deployments. The third outcome are the performance models and analysis of several MAC designs including TUTWSN, IEEE 802.15.4, and the most essential research proposals.

The results and conclusion of this Thesis indicate that it is possible to implement multi-hop WSNs in harsh and dynamic operation conditions with years of lifetime using current low-cost components and batteries. Energy analysis results indicate that the lowest energy consumption is achieved by using simple and high data-rate transceivers. It is also critical to minimize sleep mode power consumption of all components and to use accurate wake-up timers. However, the selection of components constitutes only a minor part of the solution, and an energy-efficient MAC layer design being able to minimize radio duty cycle is required. A theoretically ideal MAC eliminates idle listening, overhearing, collisions, and control traffic overhead. The performance analysis shows that TUTWSN MAC achieves the highest energy-efficiency in both router and leaf nodes compared to existing proposals and standards. Compared to the ideal MAC, the energy consumption of TUTWSN MAC is only 2.85% - 27.1% higher, depending on traffic load, radio, and node type. IEEE 802.15.4 performs the second best resulting in 2.92% to 229% energy overhead. Analysis and measurements indicate that TUTWSN can maintain high energy-efficiency also in dynamic networks. The MAC and platform designs are measured and validated in long-term deployments using full-scale WSN implementations.

The results of this Thesis can be used in the WSN research, development, and implementation in general. The designed mechanisms in the MAC layer are presented and analyzed separately on each other. Presented performance models can be easily adapted to other protocols. In addition, the developed sensor node platforms are applicable for experimenting other applications and protocol.