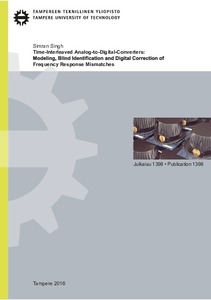 Analog-to-digital-conversion enables utilization of digital signal processing (DSP) in many applications today such as wireless communication, radar and electronic warfare. DSP is the favored choice for processing information over analog signal processing (ASP) because it can typically offer more ﬂexibility, computational power, reproducibility, speed and accuracy when processing and extracting information. Software deﬁned radio (SDR) receiver is one clear example of this, where radio frequency waveforms are converted into digital form as close to the antenna as possible and all the processing of the information contained in the received signal is extracted in a conﬁgurable manner using DSP. In order to achieve such goals, the information collected from the real world signals, which are commonly analog in their nature, must be converted into digital form before it can be processed using DSP in the respective systems. The common trend in these systems is to not only process ever larger bandwidths of data but also to process data in digital format at ever higher processing speeds with sufficient conversion accuracy. So the analog-to-digital-converter (ADC), which converts real world analog waveforms into digital form, is one of the most important cornerstones in these systems.

The ADC must perform data conversion at higher and higher rates and digitize ever-increasing bandwidths of data. In accordance with the Nyquist-Shannon theorem, the conversion rate of the ADC must be suffcient to accomodate the BW of the signal to be digitized, in order to avoid aliasing. The conversion rate of the ADC can in general be increased by using parallel ADCs with each ADC performing the sampling at mutually different points in time. Interleaving the outputs of each of the individual ADCs provides then a higher digitization output rate. Such ADCs are referred to as TI-ADC. However, the mismatches between the ADCs cause unwanted spurious artifacts in the TI-ADC’s spectrum, ultimately leading to a loss in accuracy in the TI-ADC compared to the individual ADCs. Therefore, the removal or correction of these unwanted spurious artifacts is essential in having a high performance TI-ADC system.

In order to remove the unwanted interleaving artifacts, a model that describes the behavior of the spurious distortion products is of the utmost importance as it can then facilitate the development of efficient digital post-processing schemes. One major contribution of this thesis consists of the novel and comprehensive modeling of the spurious interleaving mismatches in different TI-ADC scenarios. This novel and comprehensive modeling is then utilized in developing digital estimation and correction methods to remove the mismatch induced spurious artifacts in the TI-ADC’s spectrum and recovering its lost accuracy. Novel and ﬁrst of its kind digital estimation and correction methods are developed and tested to suppress the frequency dependent mismatch spurs found in the TI-ADCs. The developed methods, in terms of the estimation of the unknown mismatches, build on statistical I/Q signal processing principles, applicable without speciﬁcally tailored calibration signals or waveforms. Techniques to increase the analog BW of the ADC are also analyzed and novel solutions are presented. The interesting combination of utilizing I/Q downconversion in conjunction with TI-ADC is examined, which not only extends the TI-ADC’s analog BW but also provides ﬂexibility in accessing the radio spectrum. Unwanted spurious components created during the ADC’s bandwidth extension process are also analyzed and digital correction methods are developed to remove these spurs from the spectrum. The developed correction techniques for the removal of the undesired interleaving mismatch artifacts are validated and tested using various HW platforms, with up to 1 GHz instantaneous bandwidth. Comprehensive test scenarios are created using measurement data obtained from HW platforms, which are used to test and evaluate the performance of the developed interleaving mismatch estimation and correction schemes, evidencing excellent performance in all studied scenarios.

The ﬁndings and results presented in this thesis contribute towards increasing the analog BW and conversion rate of ADC systems without losing conversion accuracy. Overall, these developments pave the way towards fulﬁlling the ever growing demands on the ADCs in terms of higher conversion BW, accuracy and speed.