Techniques for Signaling and Service Discovery in DVB-H Networks 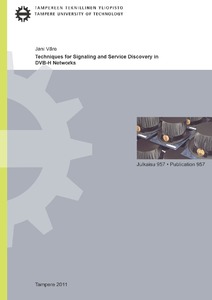 Mobile TV was a service concept first adopted by the Japanese ISDB-T standard and soon afterwards it was adopted by the European DVB standard. In the context of DVB, specific standard branch, Digital Video Broadcasting – Handheld (DVB-H) was developed. The DVB-H was tailored for the delivery of IP based services to the handheld devices over DVB network. Furthermore, it was developed as backwards compatible with the DVB-T and hence enabled reuse of the existing network infrastructure used for the DVB-T. Time Slicing, MPE-FEC and enhanced signaling are the main elements which make DVB-H different when compared to DVB-T.

This thesis was done in two parts. In the first part the signaling and service discovery of DVB-H in mobile environment is investigated by using traditional scientific engineering methods. The focus in the first part is in the basic principles of the service discovery and soft handover in DVB-H. The second part of the thesis deals with the robustness of link layer signaling transmission in DVB-H. The robustness is investigated by means of theoretical analysis, simulations and laboratory measurements.

The main results of this thesis can be summarized as follows:

1. Definition of new PSI/SI and TPS signaling elements in DVB-H and IPDC over DVB-H standards [34], [39], [47]
2. PSI/SI Transmission optimization and configuration recommendations provided as input to the DVB-H Implementation Guidelines [38].