Object-based Modeling of Audio for Coding and Source Separation 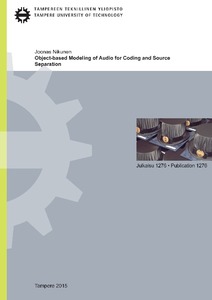 This thesis studies several data decomposition algorithms for obtaining an object-based representation of an audio signal. The estimation of the representation parameters are coupled with audio-specific criteria, such as the spectral redundancy, sparsity, perceptual relevance and spatial position of sounds. The objective is to obtain an audio signal representation that is composed of meaningful entities called audio objects that reflect the properties of real-world sound objects and events. The estimation of the object-based model is based on magnitude spectrogram redundancy using non-negative matrix factorization with extensions to multichannel and complex-valued data. The benefits of working with object-based audio representations over the conventional time-frequency bin-wise processing are studied. The two main applications of the object-based audio representations proposed in this thesis are spatial audio coding and sound source separation from multichannel microphone array recordings.

In the proposed spatial audio coding algorithm, the audio objects are estimated from the multichannel magnitude spectrogram. The audio objects are used for recovering the content of each original channel from a single downmixed signal, using time-frequency filtering. The perceptual relevance of modeling the audio signal is considered in the estimation of the parameters of the object-based model, and the sparsity of the model is utilized in encoding its parameters. Additionally, a quantization of the model parameters is proposed that reflects the perceptual relevance of each quantized element.

The proposed object-based spatial audio coding algorithm is evaluated via listening tests and comparing the overall perceptual quality to conventional time-frequency block-wise methods at the same bitrates. The proposed approach is found to produce comparable coding efficiency while providing additional functionality via the object-based coding domain representation, such as the blind separation of the mixture of sound sources in the encoded channels.