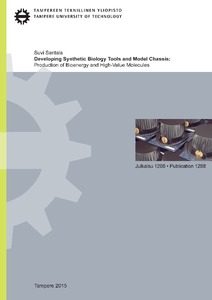 One of the aims of synthetic biology is the sustainable production of high-value compounds and bioenergy molecules. Synthetic biologists exploit fundamental engineering principles, such as DNA component standardization, modular genetic circuits, and de novo design, to create novel production pathways and products. A well-characterized host cell serves as the chassis for the system construction; generally, the model bacterium Escherichia coli is applied. However, the metabolism and characteristics of E. coli are not ideal for all applications. Furthermore, many E. coli based systems are patent protected which restricts the use in forthcoming application.
Acinetobacter baylyi ADP1 is a potential alternative host for synthetic biology. The metabolism and genetics of the strain are well-understood, and the engineering of its genome is technically straight-forward. The versatile and unusual metabolic pathways, including those producing long chain hydrocarbons, can be rerouted, modified, and integrated into novel ones. I exploited A. baylyi ADP1 as a model host for the production of high-value hydrocarbons, triacylglycerols and wax esters. I employed metabolic engineering, novel molecular monitoring tools, and synthetic pathway design to improve the production, and to demonstrate the utility of ADP1 as a synthetic biology host. In particular, the production of triacylglycerols was improved over 5-folds by targeted gene deletions which resulted in redirected carbon flux towards the product and elimination of competitive pathways.
The long-chain hydrocarbon metabolism, including alcohol and wax ester biosynthesis, is not yet fully understood. These pathways are regulated through several mechanisms sensitive to specific environmental conditions and the cellular states. However, the lack of robust and straight-forward analysis tools has restricted the studies of lipid metabolism and production kinetics. I developed a simple in vivo tool for the investigation of the long chain hydrocarbon metabolism in real-time. The tool is based on a light-producing reporter enzyme, bacterial luciferase. The enzyme utilizes a specific intermediate of the hydrocarbon synthesis pathway as a substrate for bioluminescence production. Initially, the tool was applied for monitoring the wax ester metabolism of A. baylyi ADP1. Subsequently, I modified the monitoring tool for studying the degradation of alkanes. The studies suggest that the tool can be applied for production optimization in different hosts and for a variety of products. I also reconstructed the wax ester synthesis pathway of A. baylyi ADP1 by replacing a natural key enzyme with an alternative well-characterized component, enabling a regulated production of unnatural wax esters.
Bioprocess control and scale-up of production systems are challenging. Multispecies cultures are suggested to improve the robustness and performance of bacterial production processes. I exploited the metabolic versatility of A. baylyi ADP1 to construct a rationally engineered synthetic coculture with E. coli. The designed coculture exhibited improved biomass and recombinant protein production compared to the pure culture of E. coli.
To conclude, I have shown that the strain ADP1 is a suitable host for synthetic biology applications, especially for long-chain hydrocarbon production, the development of novel tools for metabolic studies, and for exploiting the existing unusual metabolic networks of the cell. Thus, further studies of the remaining challenges related to ADP1 bioprocess and as-of-yet uncharacterized cell mechanisms, are warranted.