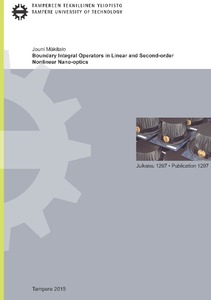 Recent advances in the fabrication of nanoscale structures have enabled the production of almost arbitrarily shaped nanoparticles and so-called optical metamaterials. Such materials can be designed to have optical properties not found in nature, such as negative index of refraction. Noble metal nanostructures can enhance the local electric field, which is beneficial for nonlinear optical effects. The study of nonlinear optical properties of nanostructures and metamaterials is becoming increasingly important due to their possible uses in nanoscale optical switches, frequency converters and many other devices.

The responses of nanostructures depend heavily on their geometry, which calls for versatile modeling methods. In this work, we develop a boundary element method for the modeling of surface second-harmonic generation from isolated nanoparticles of very general shape. The method is also capable of modeling spatially periodic structures by the use of appropriate Green’s function. We further show how to utilize geometrical symmetries to lower the computational time and memory requirements in the boundary element method even in cases where the incident field is not symmetrical.

We validate the boundary element approach by the calculation of second-harmonic scattering from gold spheres of different radii. Comparison to analytical solution reveals that under one percent relative error is easily achieved. The method is then applied to model second-harmonic microscopy of single gold nanodots and second-harmonic generation from arrays of L- and T-shaped gold particles. The agreement between the calculations and measurements is shown to be excellent.

To provide a more intuitive understanding of the optical response of nanostructures, we develop a full-wave spectral approach, which is based on boundary integral operators. We present a theory which proves that the resonances of a smooth scatterer are isolated poles that occur at complex frequencies. Other types of singularities, such as branch-cuts, may occur only via the fundamental Green function or material dispersion. We propose a definition of an eigenvalue problem at fixed real frequencies which gives rise to modes defined over the surface of the scatterer. We illustrate that these modes accurately describe the optical responses that are usually seen for certain particle shapes when using plane-wave excitations. With the spectral approach, the resonance frequencies and the modal responses of a scatterer can be found as intrinsic properties independent of any incident field. We show that the spectral theory is compatible with the Mie theory for pherical particles and with a previously studied quasi-static theory in the limit of zero frequency.