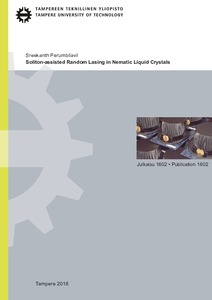 Random lasers are resonator-less light sources where the optical feedback for lasing arises from recurrent multiple scattering events in a disordered gain medium. During the past 20 years, random lasers have been the subject of intense theoretical and experimental investigations due to their novelty, simplicity and ruggedness as well as their great potential for applications ranging from imaging to biomedical diagnostics. Common random lasers, however, tend to emit light in a wide range of directions with poor beam quality. The lack of pre-determined directionality and its control along with poor spatial characteristics hinder the applications of random lasers in many fields.

It has been shown that dye-doped nematic liquid crystals can random lase when optically pumped within the absorption region of the dye molecules. Moreover, through molecular reorientation they support the propagation of self-guided optical beams, known as nematicons, which act as real-time graded-index optical waveguides.

In order to address the problems of conventional random lasers, this Thesis focuses on the demonstration of a configuration were an efficient random laser with directional output is realized in dye-doped nematic liquid crystals by combing optical gain, random scattering, and nematicons. A planar cell filled with a mixture of commercial E7 nematic liquid crystals (host) and PM 597 (guest) is used as the material. A near infrared continuous-wave beam is used to launch a nematicon, while a 6 ns pulsed beam at 532 nm is used to optically pump the material. The synergy of random lasing and nematicons in this geometry provides several breakthrough results.

By adopting a pumping geometry collinear with the nematicon, we demonstrate random laser emission from the initial region of the nematicon. The nematicon waveguide provides transverse confinement to the emitted photons, resulting in directionality, high photon collection, and high slope efficiency. The nematicon also modulates the emission, allowing the realization of a random transistor laser, where a low-power continuous-wave input is able to lower the threshold for lasing.

By taking advantage of the response of nematicons to external stimuli, we also demonstrate a random laser emitting in a voltage-controlled direction. Finally, we demonstrate in-plane random laser steering by external magnetic field. The latter approach allows us to steer the random laser beam over 14°.