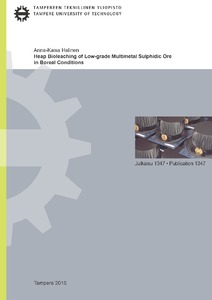 The bioleaching of metal sulphide ore has developed into an important industrial process to recover valuable base metals from low-grade ores, because high grade ore resources are depleting. The Talvivaara deposits in Finland have been known for decades, but have not been utilized until now, because of the low nickel concentration. The aim of this work was to study the bioleaching process of a Finnish complex multimetal black schist ore in boreal conditions. The effects of pH and leaching temperature on the dissolution of valuable metals and gangue minerals were studied. The effect of low temperature on iron oxidation and mineral bioleaching was investigated. Microbial community development at different pH values and temperatures was tested in laboratory-scale bioleaching columns and finally the community dynamics were studied in a demonstration-scale bioheap over a period of three years in Talvivaara Finland.

The experiments were carried out using laboratory-scale columns containing about 9 kg of agglomerated ore. The columns were loaded with the ore, irrigated with pregnant leaching solution (PLS) by recycling and aerated from the bottom. The tested pH range was from 1.5 to 3.0 at 21 ºC and temperature range was from 7 to 50 ºC at pH 2.5. The particle size (d80) of the ore was 7.6 mm. Surface water taken from lake near the Sotkamo deposit (slightly affected by acid mine drainage) supplemented with nutrients was used for irrigation. Aeration was provided through a diffuser inserted at the base of the column. The iron- and sulphur-oxidizing bacterial culture used in inoculation of the columns, was enriched from surface water samples (pH 4.5-6.9) obtained from the ore deposit. The pH of irrigation solution was maintained with continuous titration with H2SO4. The ore was acid consuming in all tested conditions. The actual pH of the irrigation solutions after 140 days were 0.1-0.5 units over the target values in all columns. Leaching at low pH resulted in increased acid consumption of 160 and 38 H2SO4 g kg-1 ore at pH 1.5 and 2.0 after 140 days. Temperature, at pH 2.5, had also effect on acid consumption. At 50 ºC acid consumption was highest and lowest at 21 ºC, being 29 and 8 H2SO4 g kg-1 ore, respectively.

The pH of the irrigation solution clearly affected to the dissolution of nickel and zinc. Nickel solubilization rate was 3.3 times higher at pH 1.5 than at pH 3.0, being 0.42 and 0.13 % (Ni) d-1, respectively. At pH 1.5 valuable metals yields were 59 % for Ni, 52 % for Zn, 13 % for Cu and 16 % for Co, whereas at pH 3.0 yields were 15 % for Ni, 10 % for Zn, 0.5 % for Cu and 6 % for Co after 140 days of bioleaching. No significant bioleaching happened after that at pH 1.5, 2.5 or 3.0. At pH 2.0 the maximum yields were achieved after 230 days of bioleaching. Nickel and zinc leaching rates and yields decreased nearly linearly as pH increased. Copper did not bioleach at high pH (2.5-3.0). After the beginning, no further cobolt dissolution happened at pH 3.0. Decrease in leaching rates may be due to a lack of dissolved ferric iron, serving as a leaching agent, or metal dissolution barriers created by precipitates on the ore surfaces. The ferric iron concentration in PLS increased all the time at pH 1.5, being 36 g l-1 after 140 days. At pH 2.0 the ferric iron concentrations varied, being highest 3.8 g l-1 after 97 days. At 2.5 and 3.0 no ferric iron was present in PLS and iron concentration remained low, being 15 mg l-1.

After 60 days of bioleaching the leach liquor at pH 1.5 became jelly-like due to solubilization of Si from the ore, which contained 42 % (w w-1) of SiO2. Quartz, phlogopite, and feldspars (anorthite and microcline) were the main Si-containing phases. After 110 days the Si concentration reached 2.96 g L-1 at pH 1.5. Soluble Si increases the solution viscosity and thus hinders leach liquor percolation trough the heap, lowers the oxygen transfer rate, and complicates subsequent metal extraction. Although, dissolved Si did not affect the solubilization of valuable metals, the pH value of the PLS must be kept at over 1.5 to slow down Si-containing mineral dissolution. At pH 2.5 less than 200 mg L-1 Si was solubilized and different temperatures had no effect on Si dissolution at that pH.

Based on an optimisation between the maximum valuable metal yields, leaching rates, the acid consumption, and the low dissolution of cations (Si, Al, Ca, Mg and Mn), the leaching solution pH of 2.0 was recommended for a bioheap application. At pH 2.0, the maximum leaching yields were achieved after 230 days, being 54 % for Ni, 37 % for Zn, 13 % for Cu and 12 % for Co.

The redox increased during the first two months at 7 ºC and reflected the start of ferrous iron oxidation and microbial activity. The concentration of ferric iron was around 400 mg L-1 after two months. After that ferric iron was present all the time at 7 ºC and this demonstrated that more ferric iron was available for the oxidation of the mineral sulphide than at other temperatures. The leach liquor redox potential stabilized to 500-600 mV (Ag0/AgCl reference) at 7 ºC after 40 days and at 21 ºC right after beginning, whereas at 35 ºC and at 50 ºC it varied between 300-500 mV. At 50 ºC, all dissolved iron was in ferrous form inspite the variation of redox. After 50 days Fe2+ and Fetot were both 350 mg L-1 indicating that iron oxidation and precipitation occurred at the same time. Brown precipitates accumulated to the surfaces of the agglomerated ore in columns from 7 ºC to 50 ºC. Additionally, bright yellow precipitates were formed indicating elemental sulphur or Na-jarosite accumulation at 7 ºC and 21 ºC.

Archaeal species were analyzed two times from leach liquors and three species were detected. A species related to an uncultured archaeon clone ant b7 (99%, DQ303249), nearest known species Thermoplasma acidiphilum DSM1728 (91%, AL445067) was present in all of the leach liquors except at pH 1.5. Archaea related to Sulfolobus metallicus DSM 6482 (98%, SM16SRRN1) were present at pH values 2.5 and 3.0 and in all other temperatures, except at 7 ºC. Sulfolobus metallicus is able to oxidize both iron and sulphur compounds. Ferroplasma acidiphilum DR1 (98%, AY222042) that can oxidize only iron, was present at pH 2.5 and 2.0, and in all temperatures, expect at 35 ºC.

The mixed iron- and sulphur-oxidizing culture in the recirculation solution at 7 ºC was used in the experiments where Fe2+-oxidation rate and optimum temperature were determined over a temperature range of 2-40 ºC. Two temperature optima of 22.4 ºC and 32.4 ºC were observed. This indicated the presence of both psychrotolerant and/ or mesophilic microorganisms in the culture. This supports the suggestion that A. ferrooxidans was actually A. ferrivorans, or both species were present. The specific oxidation rates for the culture were similar, with 13.5·10-8 and 12.8·10-8 mg Fe2+ cell-1 h-1 for 22.4 ºC and 32.4 ºC, respectively.

The two demonstration-scale bioheaps (17 000 t) at the Talvivaara mine site were operated and monitored by Talvivaara Mining Company for 30 months. After the start-up of heap irrigation, oxidation of pyrrhotite and pyrite increased the heap temperature in central locations up to 90 ºC. In the second winter temperatures inside the heaps decreased being still 80 ºC at the hottest spots. Leach liquor temperatures varied between 60 ºC and 15 ºC over the whole operation period. The target pH of the PLS was 2.0. Inspite of continuous titration pH varied during the 10 months between 3.5 and 3.0 and after that between 3.0 and 2.5.

The bacterial community composition on the heaps was monitored over time from manholes and the leach liquor collection ponds. At the end of the primary bioleach phase (18 months) cell counts were around 106 cells mL-1. Large temperature gradients resulted in the simultaneous presence of mesophilic and thermophilic iron- and sulphur-oxidisers in the heap. In the beginning diversity was broad, but decreased with time. A. ferrooxidans/ ferrivorans SS3 (99%, CP002985) was the dominant bacterium and an unknown bacterium related to clone H70 (91%, DQ328625) was present. After six months of bioheap operation L. ferrooxidans DSM 2705 (98%, X86776) was observed for the first time and it was present thereafter in nearly all samples. Archaea were analysed during the primary leaching phase from leach liquors. Two novel archaea and one archaea related to Thermoplasma acidophilum strain 122-1B2 (91-93%, NR_028235) were detected.

Several ore samples were drilled from the primary bioheaps after one year of bioheap operation. A. ferrooxidans/ A. ferrivorans SS3 (99%, CP002985) was present in nearly all samples. The novel bacterium related to clone H70 (91%, DQ328625) and A. caldus related bacteria (95%, AY427958) was detected from the areas of wide temperature variation. Sb. thermosulfidooxidans strain YN22 (99%, DQ650351) was found from the high temperature zones of the heap. Ferrimicrobium acidiphilum T23 (99%, AF251436) was present in the areas where temperature varied between 20 and 35 ºC. After 18 months of demonstration-scale heap operation, the heaps were reclaimed and restacked to the secondary bioheap. At the secondary leaching phase the community remained steady. A. ferrooxidans/ ferrivorans SS3 (99%, CP002985) dominated and the novel bacterium related to a clone H70 (91%, DQ328625) and L. ferrooxidans DSM 2705 (98-100%, X86776) were present in the leach liquors of secondary phase bioheaps.