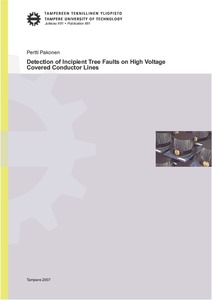 This thesis considers the detection of incipient faults caused by trees falling on high voltage covered conductor (HVCC) lines. A tree falling on a HVCC line does not cause an immediate power supply interruption, but it causes partial discharges (PD) which eventually lead to breakdown of the conductor covering. At 110 kV voltage level the breakdown may occur in a few hours. The breakdown and a power supply interruption to customers might be avoided if the incipient tree faults could be detected automatically within a few tens of minutes of the tree fall. This thesis presents a method based on on-line partial discharge measurements and a pilot system for automatic detection of incipient tree faults (ITF s) on HVCC lines and analyses the factors affecting the functionality of the method. The thesis is based on the analysis of measurement data acquired during several periods of field tests conducted in different seasonal and weather conditions on a full scale 110 kV CC line. During the field test periods trees were felled on the line to imitate windfalls to study the PD phenomenon related to ITF s and to study the propagation of broadband PD signals on the line. Additionally, tests with natural trees in contact with an HV covered conductor were conducted in the laboratory to characterize the PD phenomenon.


The laboratory tests show that there is a considerable variation in the magnitudes, waveforms and rise times of the PD pulses related to ITF s. According to the field tests, the variation in the PD magnitude is large considering both individual trees measured in one season and groups of trees measured in different seasons. The average PD magnitude is clearly smaller and the resistance and earthing resistance of trees clearly larger in freezing conditions in winter compared to non-freezing conditions during other seasons.


The thesis includes an extensive analysis of different factors contributing to the propagation and detection of broadband PD signals on a practical 110 kV CC line. According to the field test results there is a considerable scatter in the propagation attenuation of the travelling waves originating from the incipient tree faults. The attenuation of the pulse peak-to-peak current at a distance of approximately 9.3 km was 0.4 3.7 dB depending on the incipient fault. The scatter is explained by the differences in the power spectral densities and the propagation modes of the signals of different incipient tree faults. The former originates from differences in the waveforms of the PD pulses and the latter from differencies in the amount of capacitive coupling of the signal between the three phases determined by the capacitance between each phase conductor and the tree. The attenuation is smallest in the case of incipient short circuit faults involving a direct phase-to-phase contact and having the most harmful consequences.


According to the field test results, the time domain reflectometry (TDR) method would allow the location of incipient faults with an accuracy better than one line span if a measuring system having a sampling rate in the order of 10 MS/s is used. The thesis shows that the current transformer used as a PD sensor in the pilot installation of the incipient fault detection (IFD) system acts as a surge impedance discontinuity with a frequency dependent reflection coefficient on the HVCC line. Thus, at high frequencies the PD sensors along the line effectively segment the line into shorter portions, facilitating fault location by the TDR method.


The thesis shows that the effect of termination of the line end at the substation on the measured PD magnitude depends on the PD sensor. Disconnecting the 110/20 kV transformer from the line end decreases the PD magnitude measured by an inductive sensor to less than one third and increases the PD magnitude measured by a capacitive sensor by a factor of 1.1 1.3 compared to the state of normal operation with the transformer connected to the line. The inductive sensor measures the current wave travelling in the phase conductor and the capacitive sensor measures the voltage wave between the phase conductor and ground.