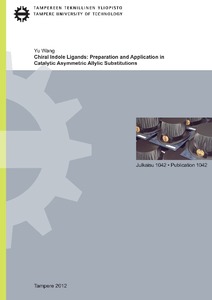 Indoles have high structural flexibility, and the functionalization of the indole skeleton has extensively been investigated. Therefore various possibilities are offered for the design of catalytic ligands with an indole core. The theory part of this thesis is divided into three parts: the first part is an introduction on the use of chiral catalytic ligands with focus on oxazoline-containing ligands; the second part introduces the modification of the indole ring system at the N1-, C2- and C3-position; the third part gives an overall introduction on catalytic asymmetric allylic substitution with hetero-nucleophiles. In the results part of the thesis, the design and preparation of novel indole-phosphine-oxazoline (IndPHOX) ligands from readily available starting materials are presented. These modular ligands include an indole skeleton with either a phosphine moiety at the 2- or 3-position or an oxazoline ring at the 1-, 2- or 3-position, respectively.

The IndPHOX ligands were first evaluated in palladium-catalyzed allylic alkylation with dimethyl malonate, generating the product in good yield and high ee. The ligands with a diphenylphosphine group and an oxazoline moiety at the 2 or 3-position, respectively, demonstrated high catalytic efficiency in palladium-catalyzed allylic amination with various N-nucleophiles, even with aromatic aniline having low nucleophilicity. N-functionalized IndPHOX ligands bearing various groups were also synthesized. The effects of N1-substituents to the reaction rate, yield and asymmetric induction in palladium-catalyzed asymmetric allylic amination have been discussed. In addition, the enhancement of enantioselectivity due to the presence of an oxygen atom in ligands with a N-MOM or a N-THP group has been presented in the thesis.