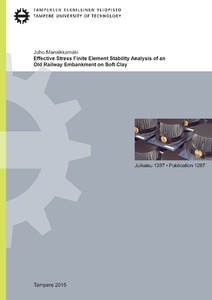 This dissertation discusses undrained effective stress Finite Element (FE) stability analyses on normally consolidated soft clay. A key part of this study is a true scale failure test, which was conducted in Perniö in 2009 and is used as a benchmark for the analyses. The site investigations and the laboratory tests related to the field test are also discussed in this study.

For long before this study there have been indications that the total stress stability analyses might in some cases underestimate the overall safety factor of the old railway embankments. On the other hand, the effective stress analysis will overestimate the safety factor if the failure induced pore pressure is not accounted for. This study shows how the effective stress FE analysis is conducted in a manner that the excess pore pressure is sufficiently accounted for. In addition, this study shows how the total stress stability analysis according to the Field Vane Test is underestimating the failure load in the case of the Perniö field test.

Most of the standard material models which are applicable for the effective stress soft soil analyses are discussed in this study. In addition, the anisotropic S-CLAY1S model and the elasto-viscoplastic EVP-SCLAY1S model are studied. The determination of the model parameters is demonstrated and discussed in detail. Strengths, and possible weaknesses of the different models are independently studied and discussed and the performance of the models is compared to the field measurements of the full scale test.

Chapter 6 of this study contains 3D analyses which were conducted with the Soft Soil model. The effects of three dimensional loading conditions and a finite size of the failure surface are studied. It is shown that the loading structure was so long that the 3D effects had only little effect on the results of the field test. On the other hand, it was observed that there was a clear but unidentified difference between the results of the 2D and 3D programs even if similar plane strain geometry was studied.

In the calculation results, it is shown that the Mohr-Coulomb model clearly overestimates the safety factor. The Modified Cam Clay model is also not suitable without parameter manipulation. The strength of the clay is anisotropic, but this study shows that the isotropic Soft Soil model can be used for the stability analysis when the parameters are correctly selected. The calculated excess pore pressures and the failure loads were very similar in the Soft Soil and S-CLAY1S models. Still, the strength distribution of the SCLAY1S model is more realistic and the model is more versatile compared to the Soft Soil model.

The Hardening Soil model overestimated the failure load. Hence it is doubtful if the model is suitable for the stability analysis of very soft NC clays. The HSsmall model might be usable, but a complex adjustment of stiffness parameters is needed, and therefore, detailed unambiguous instructions for the use of the model are not given in this study.

A recommendation is given in Chapter 7 for how the overall safety factor should be established with the Soft Soil model and how the parameters could be selected for the Soft Soil and S-CLAY1S models. Other important aspects affecting the effective stress stability analyses are discussed and highlighted in the conclusions. It was found that the quality of sampling should be improved in Finland. The failure of the railway embankment had progressive features which are possible and should be taken into account in the stability analysis.