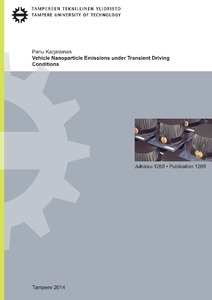 Sulfur originating in the fuel or lubricant oil can be stored inside catalysts, and later be released, forming semivolatile nucleation mode (NM) particles when temperature rises. This behavior was detected for LD and HD engines in the engine laboratory, for a HD vehicle on the road and in a simplified measurement setup in an aerosol laboratory. The aerosol laboratory test indicated that the NM formation does not necessarily require hydrocarbons or sulfated hydrocarbons; particles are electrically neutral and evaporate when they undergo thermal treatment. While sulfur is released from the catalysts, the HD road engine study indicated that the increased NM particle emission is not explained by the concentration of gaseous sulfuric acid. The sulfur storage and release depends greatly on the driving history, also due to this NM particle emissions seem plausible, even with low sulfur fuels. With catalytic particle filters, the amount of soot is reduced, promoting semivolatile NM particle emissions.

An unexpected observation was made that some engines produce nanoparticles containing lubricant oil derived metals during driving while not fueled. Exhaust particles were observed during engine braking events for a HD truck and LD gasoline vehicles. For the truck and gasoline vehicles, the engine braking related particles contributed up to 20-30% and 3-30% of the total number emissions, respectively. These particle emissions can be a reality for all vehicle types not using particle filtration, including the latest technology vehicles. In particle filters, engine braking related particles can affect the ash accumulation and transport mechanisms.