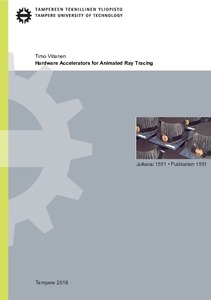 Future graphics processors are likely to incorporate hardware accelerators for real-time ray tracing, in order to render increasingly complex lighting effects in interactive applications. However, ray tracing poses difficulties when drawing scenes with dynamic content, such as animated characters and objects. In dynamic scenes, the spatial datastructures used to accelerate ray tracing are invalidated on each animation frame, and need to be rapidly updated. Tree update is a complex subtask in its own right, and becomes highly expensive in complex scenes. Both ray tracing and tree update are highly memory-intensive tasks, and rendering systems are increasingly bandwidth-limited, so research on accelerator hardware has focused on architectural techniques to optimize away off-chip memory traffic. Dynamic scene support is further complicated by the recent introduction of compressed trees, which use low-precision numbers for storage and computation. Such compression reduces both the arithmetic and memory bandwidth cost of ray tracing, but adds to the complexity of tree update.

This thesis proposes methods to cope with dynamic scenes in hardware-accelerated ray tracing, with focus on reducing traffic to external memory. Firstly, a hardware architecture is designed for linear bounding volume hierarchy construction, an algorithm which is a basic building block in most state-of-the-art software tree builders. The algorithm is rearranged into a streaming form which reduces traffic to one-third of software implementations of the same algorithm. Secondly, an algorithm is proposed for compressing bounding volume hierarchies in a streaming manner as they are output from a hardware builder, instead of performing compression as a postprocessing pass. As a result, with the proposed method, compression reduces the overall cost of tree update rather than increasing it. The last main contribution of this thesis is an evaluation of shallow bounding volume hierarchies, common in software ray tracing, for use in hardware pipelines. These are found to be more energy-efficient than binary hierarchies. The results in this thesis both conﬁrm that dynamic scene support may become a bottleneck in real time ray tracing, and add to the state of the art on tree update in terms of energy-efficiency, as well as the complexity of scenes that can be handled in real time on resource-constrained platforms.