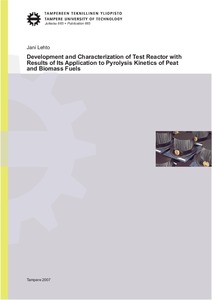 The Finnish Government has strongly supported research on the exploitation of various biomass fuels at the expense of fossil fuels, which are one of the main contributors to the greenhouse effect. Biomass fuels are a widely available, renewable and CO2-neutral energy source and are increasingly used as an alternative to fossil fuels for heat and energy supply. Peat is not completely CO2-neutral. However, the annual growth of peatlands binds some of the CO2 released during combustion. Hence, the classification of peat is somewhat unclear. The Finnish Government has proposed that peat could be classified as a slowly renewable natural resource. Moreover, peat and biomass fuels are important for the Finnish economy since they are indigenous fuels. Thus, exploitation is desirable not only due to their environmental but also due to their socio-economic effects.Fluidized bed combustion has a long tradition in Finland. Especially the big pulp and paper industry in Finland has adopted flexible and reliable fluidized bed combustion for its steam and energy production system. Additionally, Finland has strong know-how in fluidized bed combustion since the world s leading fluidized bed boiler manufacturers have their offices in Finland.It is known that several factors, such as temperature level and heating rate, have a strong effect on the volatile yield of a fuel during devolatilization. Even then the volatile content of a fuel is usually determined using slow-heating-rate standardized tests developed for coal or by thermogravimetry. Although these methods yield information on the volatile content of low-volatile-content fuels like coal, they do not work reliably with high-volatile-content fuels. As a result, neither the test methods developed for coal nor the results obtained from research on pyrolysis and combustion of coal can be directly adopted to peat and biomass cases. Instead, methods used in conditions more similar to those encountered in practical applications should be used for more accurate fuel characterization.This dissertation concerns the pyrolysis of high-volatile-content fuels, such as biomass and peat. The dissertation also presents the development and characterization of a laboratory-scale test reactor for reliable determination of the volatile content of high-volatile-content fuels in conditions similar to those in fluidized bed boilers. Both experimental and modeling tools are used to study the pyrolysis characteristics of Finnish milled peat.The volatile yield of Finnish milled peat at different residence times was determined using the developed reactor. Based on the experimental results, the kinetic parameters for Finnish milled peat are presented using two different kinetic models. Also, a method for estimating final volatile yield of peat pyrolysis is presented.