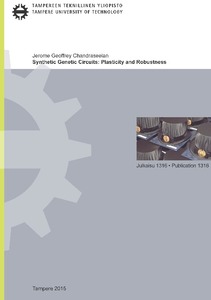 Living organisms have evolved to survive in a multitude of environmental conditions. This plasticity, and the robustness to environmental fluctuations, is achieved by altering gene expression levels in response to perturbations while maintaining the basic processes essential for survival. Genetic circuits, which are networks of interacting genes, are responsible for carrying out both the basic processes to sustain life, such as counting time, as well as the specific processes that provide them with adaptability to various environmental conditions while maintaining homeostasis.

Gene expression and its regulation are dynamic, stochastic processes. Namely, although gene expression was previously considered to be identical in cells arising from common ancestors, the observation of multiple, single cells expressing fluorescent proteins has shown that gene expression is noisy, which allows genetically identical cells in a homogeneous environment to behave differently, a phenomenon known as cell-to-cell phenotypic variability. Noise in gene expression arises from the fact that most of the underlying biochemical reactions involve small molecular numbers, which leads to infrequent, to some extent random in time, interactions and processes. While initially noise in gene expression was considered to be disadvantageous to the organisms, a number of recent studies suggest significant functional roles for noise in intracellular processes.

The complexity and size of natural genetic circuits hampers their detailed study at present. One approach to overcome this problem is based on design of small, and thus more tractable, artificial circuits. Aside from its small size, in such circuits, all components are known and there is less chance that they interact with unknown cellular components. This strategy offers additional advantages, such as testability of whether a certain architecture is able to generate a desired trait or function without affecting natural cellular processes e.g., by inducing other downstream effectors that affect cell functioning. Moreover, it provides an opportunity to compare different circuit designs and determine which circuit architecture is preferable. Finally, due to detailed knowledge of their structure, the behavior of these circuits can be computationally simulated to assist, e.g., the study of their long-term behaviors, among other. Previous studies based on synthetic circuits have already provided key insights into the design principles and architecture of genetic circuits, such as how these organize genes so as to gain the ability to make decisions or track time. These circuits are also expected to become of great use in therapeutic and industrial applications.

In this thesis, we focused on the study of the phenotypic plasticity and robustness of synthetic genetic clocks. We focused on the effects of temperature, copy number and the role of components; proteins and promoters, of the circuit. For this, we made use of the well-known genetic Repressilator, a synthetic genetic clock that is also one of the simplest genetic circuits known to be functional in a living system. To assist the studies, aside from techniques from cell and molecular biology, we made use of state of the art techniques in microscopy and image analysis. From the data, we characterized, first, the phenotypic plasticity of individual genes in Escherichia coli, as these are the main components of the Repressilator. Next, we performed a study of the effects of temperature on the dynamics of the genetic Repressilator. Subsequently, we studied the degree of synchrony between sister cells, each containing the Repressilator, in order to evaluate the extent to which cell division affects the dynamics of this circuit. Finally, we inserted the Repressilator genetic code into a single-copy vector so as to, by comparison with the original construct, study the effects of copy numbers on the dynamics of the circuit.