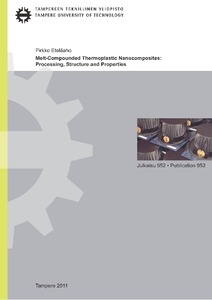 Thermoplastic nanocomposites are very intriguing materials, since they have enormous possibilities in various applications, for instance, in automotive and packaging industries. If the full potential of nanofillers can be harnessed, it is possible to obtain marked benefits such as lighter-weight structures with equal or improved mechanical performance, better barrier properties, improved thermal and fire resistance, easier processability and better surface appearance. However, establishing a fine and uniform dispersion and strong adhesion is often challenging in thermoplastic polymer matrices.

The aim of this study was to analyze the dispersion and performance of three nanofillers (clay, calcium carbonate and titanium dioxide) in melt compounded thermoplastic nanocomposites. Various melt compounding techniques, filler surface modifications and coupling agents were applied and their effects on the nanocomposite structure and properties were examined.

In nanoclay-filled composites, it was shown that both the processing history and the coupling agent characteristics have significant effects on the nanocomposite structure and properties. The most balanced overall performance was achieved through masterbatch dilution where the two most critical parameters, dispersion and adhesion, were best combined. The mechanical property enhancements were more pronounced with the use of the in-house-made masterbatches in comparison to their commercial counterparts. As comes to the effects of the coupling agent selection, the molecular weight of the coupling agent seemed to have a strong influence on the obtained intercalation and exfoliation level, whereas its maleic anhydride content seemed to be more crucial in terms of mechanical property enhancements. However, after the two-phase mixing process the use of the coupling agent having lower functionality led to high mechanical performance as well.

In case of CaCO3-filled nanocomposites, it was shown that the success of the surface modification process played a crucial role in terms of filler dispersion and property enhancements. Even though similar properties were achieved with commercial unmodified CaCO3 together with a coupling agent or neat stearic acid-modified CaCO3, the behaviour of the surface-modified pilot grade was considerably divergent resulting in very soft and tough behaviour.

The TiO2-based nanocomposites were prepared either by direct melt compounding or by first coating the polymer particles with TiO2 through atomic layer deposition (ALD) followed by subsequent melt compounding. The morphological structure of the nanocomposites differed markedly depending on their processing history. The ALD-created materials produced a stronger effect on mechanical properties leading to, for instance, a higher Young’s modulus. On the other hand, they induced a sharp transition from ductile to brittle behaviour.